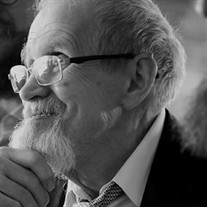 William Ray Jacobs, “Bill”, age 79, of Carroll was called home to heaven Thursday, May 26, 2022. Bill lived a life as a steadfast follower of the Lord, never lacking in zeal, and keeping his spiritual ferver as a loyal member of Holy Spirit Church to his last day. Bill considered himself a rich man… not by money or by material treasures, but by all that he got to experience surrounded by his loved ones during his mission here on earth. He truly treasured nights full of Netflix next to his beloved wife “Patty,” even if he did doze off. He treasured trips to the boundary waters to fish with his boys, even though he did fall off a cliff. He treasured running of to the casinos with Patty, even though the only thing he usually “won”, was time spent with his favorite person. He was up for any crazy adventure his kids dragged him on with his 25 grandkids, whether it was a cross country road trip to Virginia Beach , a quick trip to Dairy Queen just a short drive away, or a thumb twiddling contest on the couch. His legacy will live on through the generations to come in the form of the great love he had for each and every one of us, his famous “Willieisms,” and a few too many stinky “ pull my fingers”. Bill is now united with his parents, Thelma and Raymond Jacobs, along with his younger sister Cindy Richards, and his younger brother Michael Jacobs, as well as a son Jacob at birth. Bill is survived by his one true love, his beloved wife Pat, and their eight children along with their spouses; Michelle and Robert Vogl, Kellie and Claudio Gianello, Lonnie and Kevin Dirks, Adam and Molly Jacobs, Lisa and Brian Reid, Josh and Kate Jacobs, Luke Jacobs, and Amber and Brian Fasbender. Bill is also survived by his 25 grandchildren and 11 great grandchildren. Halie, Ethan, Brittany, Skylar, Gabrielle, John, Jade, Jazmine, Journey, Jena, Nick, Matt, Jared, Quinn, Riley, Maddison, Kennedy, Reagan, Jet, Jaggar, Jillian, Aidan, Gabe, Ravyn, Grace, Morgan, Aidan, Grace, Maren, Phoenix, Lennon, Charlotte, Callahan, Enzo, Emberly, Nova, Adrian and likely many more to come. “For to me, to live is Christ and to die is gain.” – Philippians 1:21 Thank you to our friends, families, neighbors, and our community for all the prayers and warm wishes. Private services will be held at a later date.

William Ray Jacobs, &#8220;Bill&#8221;, age 79, of Carroll was called home to heaven Thursday, May 26, 2022. Bill lived a life as a steadfast follower of the Lord, never lacking in zeal, and keeping his spiritual ferver as a loyal member of... View Obituary & Service Information

The family of William Jacobs created this Life Tributes page to make it easy to share your memories.

Send flowers to the Jacobs family.