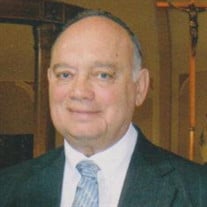 Bill Gehling, age 77, of Williamsburg and formerly of Carroll died Sunday, February 6, 2022 at Highland Ridge Care Center in Williamsburg, Iowa. Mass of the Christian Burial will be celebrated at 10:30 a.m. Wednesday, February 9, 2022 at St. Lawrence Catholic Church in Carroll. The celebrant will be Fr. Kevin Richter. Music will be by Kathy Halbur. Gift Bearers will be Madalyn and Zakk Deweese. Lector will be Bailey St. Peter. Casket Bearers will be Daniel Gehling, Yaakov Gehling, Andrew Majerus, Matthew Best, Johnathan Moore, and Chris St. Peter. Burial will be in Mt. Olivet Cemetery in Carroll with military honors conducted by the Carroll American Legion. A Rosary will be prayed at 5 p.m. on Tuesday at the Sharp Funeral Home in Carroll, visitation will then continue until 7 p.m. There will be no visitation prior to the funeral mass at the church. Funeral arrangements are under the guidance of the Sharp Funeral Home in Carroll and online condolences may be left at www.sharpfuneral.com. William, the son of William Sr. and Agnes (Staiert) Gehling was born on December 24, 1944 at Carroll, Iowa. He grew up in Carroll and graduated from Kuemper Catholic High School. After his formal education he served his country proudly in the United States Army stationed in Germany as mechanic. Upon his honorable discharge he returned to the area to help his family with their farming operation. On February 8, 1969, Bill was united in marriage to Janet Danner at St. Lawrence Catholic Church in Carroll. The couple made their home in Carroll. Bill was employed as a mechanic at Crouse Cartage, J.I. Case, and Haley Implement in Carroll. He will be remembered for his creative engineering, making multiple special tools, toys, and modifying everyday items to make them better. He would always be willing to assist others before helping himself. Left to celebrate his life are his children: Paul (Tracy) Gehling of Scranton, Deb (Jeff) St. Peter of Carroll, Carolyn Gehling of Sioux City, and Katie (Heath) Deweese of Williamsburg; 16 grandchildren, 13 great-grandchildren; siblings: Larry (Mary Lou) Gehling of Westside, Marceal (John) Wittry of Breda, Phil (Jayne) Gehling of Westside; sisters-in-law and brother-in-law: Eileen Gehling of Wall Lake, Denny (Laura) Danner of Carroll, Jenny (Mike) Peterson of Ankeny, and Richard Sibenaller of Glidden as well as many nieces, nephews and other extended relatives. Bill was preceded in death by his parents, his wife Janet in 2011; two children at birth Christine and Joan; siblings: Ray (Lenore) Gehling, Dorothy (Louis) Hoffman, Dave Gehling, Alitta (Harold) Lansink, Arthur Gehling, parents-in-law: Paul and Anna Mae Danner; sister-In-law Joyce Sibenaller.

The family of William Gehling created this Life Tributes page to make it easy to share your memories.

Bill Gehling, age 77, of Williamsburg and formerly of Carroll...