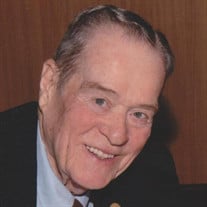 William “Bill” Carr, age 87, of Carroll, died Saturday, April 23, 2022 at his home in Carroll. Mass of the Christian Burial will be Celebrated at 10:30 a.m. Thursday, April 28, 2022 at Holy Spirit Church- St. John Paul II Parish in Carroll. The Celebrant will be Fr. Merlin Schrad, Con-Celebrant will be Fr. Allan Reicks. Music will be by Jane Heithoff and the Holy Spirit Celebration Choir. Lector will be Lana Carr. Gift Bearers will be Alex Rolfes and Christopher Rolfes. Casket Bearers will be Alex Rolfes, Christopher Rolfes, Will Lester, Dennis Lester, Steve Rolfes, and Regis Carr. Burial will be in Mt. Olivet Cemetery in Carroll. Visitation will be held from 9:30a.m. to 10:15a.m. Thursday at Holy Spirit Church. Memorials may be left at the church to be directed to the Kuemper Catholic Schools Foundation. Funeral arrangements are under the direction of the Sharp Funeral Home in Carroll, and online condolences may be left for Bill’s family at www.sharpfuneral.com. William “Bill” Carr, was born on October 21, 1934 to Louis and Mary Carr in Jersey City, New Jersey. He graduated from St. Peter’s College in New Jersey. Bill began working for Continental Insurance Company in Trenton, New Jersey, and Mt. Lebanon, Pennsylvania, where he met and married his beloved wife, Terry Malone. Bill and Terry moved to Runnemede, New Jersey then Overland Park, Kansas. In 1975 Bill began working for The Iowa Bankers Association, and he and Terry relocated to Carroll, Iowa. Bill enjoyed meeting many bankers throughout Western Iowa, finishing as vice president of Iowa Bankers Insurance and Services. In 1996 Bill and Terry retired to Ocean Springs, Mississippi where he began another career working for Kansas Bankers Insurance, a company owned by Warren Buffet. After traveling extensively in Mississippi and Louisiana, Bill decided in 1999 that it was time to retire again. The next 20 years were spent traveling throughout Europe, South America, and Mexico, where the Carrs spent five years living as Expats in Lake Chapala. In 2018 they came full circle returning to Carroll, where they enjoyed living at Orchard View. Bill is survived by Terry, his wife of 54 years, his son John in Baltimore, MD, and his daughters: Elizabeth in Buffalo, NY, Cathleen (Steve) Rolfes of Council Bluffs, IA, six grandchildren, one great-grandchild; brothers-in-law: William Stockdale (Kathy) and Sam Malone (Donna). Sister-in-law Jeanne Carr; as well as 16 nieces and nephews. He was preceded in death by his parents, Louis and Mary Carr. Son, William D. Carr. Sister- Alice Stockdale, and brother, John Carr.

The family of William Carr created this Life Tributes page to make it easy to share your memories.

Send flowers to the Carr family.