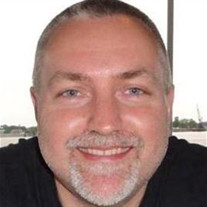 William Berg, 43 of Cambridge, England and formerly of Arcadia passed away Friday, March 3, 2017 in Cambridge, England. Mass of the Christian Burial will be celebrated at 10 a.m. Saturday, March 25, 2017, at St. John’s Catholic Church in Arcadia. The celebrant will be Fr. Mark Stoll. Con-Celebrant will be Fr. Richard Remmes. Mass Servers will be Mikayla Blum, Jacob Blum, and Brett Lux. Music will be by Sharon Bierl, and the St. John’s Choir. Lector will be Jill Wittrock. Michael and Katie Killeen, and Erin Killeen will serve as gift bearers. Eucharistic ministers will be Tom and Julie Eich, and Margaret Gruba. Casket Bearers will be Jeff Mueggenberg, Holly Mueggenberg, Jill Wittrock, Randy Berg, Craig Mueggenberg, Eric Mueggenberg, Angie Gage, and Brian Berg. Burial will be at St. John’s Cemetery in Arcadia. Friends may call at the Sharp Funeral Home in Carroll after 4 p.m. on Friday, where there will be a rosary prayed at 5 p.m., and a Christian Wake Service will be held at 7 p.m. Funeral arrangements are under the direction of the Sharp Funeral Home in Carroll, and online condolences may be left for Bill’s family at www.sharpfuneral.com. Bill, the son of Dean and Linda (Wittrock) Berg was born on March 23, 1973 at Carroll, Iowa. He grew up on the family farm near Arcadia, and graduated from Kuemper Catholic High School. Bill then attended Iowa State University in Ames where he graduated with a degree in Avionics Engineering. He worked as a software engineer in Ames until 2013 when he accepted a position in Cambridge, England, U.K., working in the same capacity for Siemens. Bill enjoyed traveling, visiting museums, and learning about the European Culture. Bill is survived by his parents: Linda and Dean Berg of Arcadia; his brother: Brad Killeen and his wife Jean of Olathe, KS; his nephew: Michael Killeen and his wife Katie of Kansas City, MO; his niece: Erin Killeen (special friend: Ryan Maddox) of Overland Park, KS; and Bill’s special friend: Sarah Buller of Hemel Hempstead, Hertfordshire, England, U.K.; as well as many aunts, uncles, and other extended relatives. Bill was preceded in death by his maternal grandparents: Florian and Elizabeth Wittrock, and his paternal grandparents: Joseph and Christine Berg.

The family of William Berg created this Life Tributes page to make it easy to share your memories.

William Berg, 43 of Cambridge, England and formerly of Arcadia...

Send flowers to the Berg family.