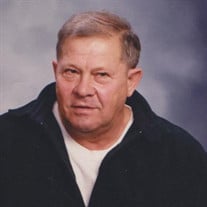 Willie Hoffman, age 84, of Carroll died Friday, August 20, 2021, at Journey Senior Services in Carroll. Mass of the Christian Burial will be Celebrated at 11 a.m., Thursday, August 26, 2021, at St. John Paul II Parish – Holy Spirit Church in Carroll. The Celebrant will be Fr. Patrick Behm. Music will be by Kathy Halbur. Mass Servers will be Hanna Brincks, Michael Kasperbauer, and Hans Kraus. Lector for the Funeral Mass will be Tom Espenhover. Gift Bearers will be grandchildren Jahla and Jolea Hoffman. Casket Bearers will be Barry Baker, Justin Hoffman, Jemma Hoffman, Jase Hoffman, Jarin Hoffman, Mason Gehling and Gary Huff. Burial will be in Mt. Olivet Cemetery in Carroll with Military Honors conducted by the Carroll American Legion. Visitation without greeting the family will be held from 10-10:45 a.m. on Thursday at the church. Funeral arrangements are under the guidance of the Sharp Funeral Home in Carroll and online condolences may be left for Willie’s family at www.sharpfuneral.com. Wilfred was born on April 6, 1937, in Carroll, Iowa. He was the third youngest of ten kids born to Rudolph and Josephine (Gute) Hoffman. Willie was raised on their family farm in rural Willey and later graduated from Carroll High School. Willie then served in the National Guard until returning to the Carroll area. He farmed south of Willey while also employed at Moorhouse Ready Mix, and Farmland Foods. Willie retired after 30 years of employment for EBI/RJ Trausch Industries. During this time he enjoyed traveling around the United States removing used supermarket equipment. Willie was married to Darlene Geary; to this union was a son Jeff. He later married Nancy Gehling. Willie loved the outdoors and taking care of his lawn and watching sports with his family. After retirement his winters were spent traveling to Arizona and tending his orange trees. Willie was fond of playing cards games and relaxing with ice cream treats with grandchildren. Everyone who met Willie was drawn to his funny sense of humor and his ability to always give to others. Willie savored his son and grandchildren which he was always lending a helping hand to. His hugs will be gratefully missed. Survivors include his wife Nancy of Carroll; his son Jeff Hoffman (Tricia) of Carroll; his grandchildren: Justin, Jahla, Jemma, Jase, Jarin, and Jolea Hoffman; Nancy’s children: Annette Gehling, Stephanie (Steve) Bachmann and their children, Charlie and Chloe, and Jeff (Tammy) Gehling and their children, Mason and Lindsey; his sisters, Rose, Charlene, and Joan; as well as other extended relatives. Willie was preceded in death by his parents; his granddaughter, Sophia Hoffman; and his siblings: Alice, Marietta, Edith, Irene, Edwin, and Loren.

The family of Wilfred Hoffman created this Life Tributes page to make it easy to share your memories.