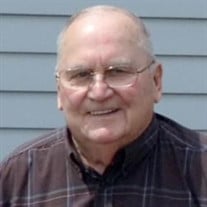 A recording of Wayne's funeral mass can be found at this link: https://youtu.be/2VCPwADvwBw Wayne Rupiper, age 90, of Roselle, IA, died October 9, 2021, at Thomas Rest Haven in Coon Rapids, Iowa. Mass of the Christian Burial will be celebrated at 10:30 a.m., Friday, October 15, 2021, at Holy Angels Catholic Church in Roselle. The Celebrant will be Fr. Steve Brodersen. Music will be by Joan Schettler and the Holy Angels Choir. Mass Servers will be Lauren Gehling and Aubrey Behrens. Lectors for the Funeral Mass will be Gina Graw, Angie Macke, and Lauren Rupiper. Gift Bearers will be Gina Graw, Bailey Rupiper, and Lauren Rupiper. Eucharistic Ministers will be Charlene Rupiper and Kathy Rupiper. Casket Bearers will be Jacob Schultes, Nic Rupiper, Mitch Rupiper, Chase Rupiper, Miles Rupiper, Jack Gottschalk, Taylor Rupiper, and Tanner Rupiper. Burial will be in Holy Angels Cemetery in Roselle. Visitation will begin at 5 p.m. on Thursday at the Sharp Funeral Home in Carroll with a Christian Wake Service at 7 p.m. Additional visitation without the family present will be held from 9-10 a.m. on Friday at the church. Funeral arrangements are under the guidance of the Sharp Funeral Home in Carroll and online condolences may be left for the Rupiper family at www.sharpfuneral.com. Wayne was born on June 17, 1931, on his parent’s farm west of Roselle, Iowa. The son of Louis and Carrie (Hugeback) Rupiper, he grew up in Roselle and attended Holy Angels School. On June 18, 1953, he was united in marriage to Alice Ocken at Sacred Heart Church in Templeton, IA. Wayne and Alice enjoyed 68 years of marriage together and were blessed with 12 children. Wayne helped on the family farm as a child, which eventually led him to being self-employed in the sheep shearing and wool buying business. Also, as livestock buyer, he looked forward to seeing his many friends as he traveled to livestock auctions across the state. Wayne was an active member of the Holy Angels Parish in Roselle for many years. He served on the Roselle Mutual Insurance board for over 40 years. Throughout his life, he enjoyed playing fast pitch softball, umpiring, bowling, ballroom dancing and traveling with Alice and their friends. He enjoyed making new friends along the way as he guessed their age with his special business card! Wayne loved following sports, especially cheering on his grandchildren and great-grandchildren. He was an avid fan of the Kuemper Knights. Anyone who knew Wayne knew that he was so proud of his family. Left to cherish his memories are children: Sherry (Steve) Wittrock of Omaha, NE, Barb (Denny) Schultes of Dedham, IA, Randy (Kathy) Rupiper of Ankeny, IA, Keith (Roxane) Rupiper of Roselle, IA, Michelle (Brian) Tigges of Johnston, IA, Dave (Carol) Rupiper of Johnston, IA, Doug (Pam) Rupiper of Carroll, IA, Kent (Tami) Rupiper of Ankeny, IA, Mark (Kim) Rupiper of Phoenix, AZ, Rhonda (Rich) Gottschalk of Omaha, NE and Scott (Mickie) Rupiper of West Des Moines, IA; 29 grandchildren; 33 great-grandchildren with one due in December; 4 step great-grandchildren; his brother LeRoy and sister-in-law Pat Rupiper; in-law’s Janice (Harlan) Wolterman of Bellevue, NE; Robert (Lynn) Ocken of Cedar Rapids, IA; Keith (Diane) Irlbeck of Northfield, MN; Nancy Ocken of DeWitt, IA; as well as many nieces and nephews. He was preceded in death by his wife Alice; parents Louis and Carrie Rupiper; daughter in infancy Mary Frances; father-in-law and mother-in-law Lawrence and Mary Ocken; in-law’s Joleen Irlbeck, Leonette Irlbeck, Ron Ocken, Merle Ocken, Larry Ocken, Lavonne Ocken, Leo Schoeppner and Vernon Irlbeck; great-grandsons Carter and Franklin Schultes. In lieu of flowers, donations may be made to the family which will be forwarded to charitable organizations.

A recording of Wayne's funeral mass can be found at this link: https://youtu.be/2VCPwADvwBw Wayne Rupiper, age 90, of Roselle, IA, died October 9, 2021, at Thomas Rest Haven in Coon Rapids, Iowa. Mass of the Christian Burial will be celebrated... View Obituary & Service Information

The family of Wayne Rupiper created this Life Tributes page to make it easy to share your memories.

A recording of Wayne&#39;s funeral mass can be found at this link:...

Send flowers to the Rupiper family.