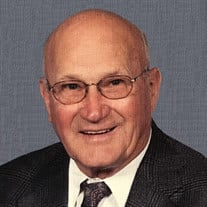 Warren Leo Heinen, age 93, formerly of Halbur, Iowa, died surrounded by family on Friday, July 7, 2017 at his daughter’s home in Omaha, Nebraska. Mass of the Christian Burial will be celebrated at 10:30 a.m. on Friday, July 14, 2017 at St. Augustine Catholic Church in Halbur. Celebrant will be Fr. Shinoj Jose. Con-Celebrant will be Fr. James deAnda. Burial will be in the parish cemetery with military honors conducted by the Arcadia American Legion. Friends may call at the Sharp Funeral Home in Carroll after 5 p.m. on Thursday, where there will be a rosary prayed at 7 p.m. The casket will be moved to St. Augustine Church on Friday morning where visitation will resume at 9:30 a.m., and continue until the time of the funeral Mass. Memorials may be left at the funeral home or at the church to be directed to the St. Joseph Education Society which supports seminarians in the Diocese of Sioux City, or to the American Life League. Funeral arrangements are under the direction of the Sharp Funeral Home in Carroll, www.sharpfuneral.com. Mr. Heinen was born on March 5, 1924, at St. Anthony Hospital in Carroll, a son of Rudolph and Minnie (Eischeid) Heinen. After attending grade school at St. Augustine in Halbur, and graduating from Carroll High School in 1942, he enrolled at Creighton University in Omaha, before he was drafted by the United States Army. He served in the Aleutian Islands, England, Germany, Italy, and France during World War II. Upon his return to the United States he continued his studies in commerce and agriculture at Creighton University, and Iowa State University. He then farmed one mile west of Halbur for forty years, until he retired in 1990. Starting in 2011, Warren and his wife, Alice, resided part-time with their daughter, Janice Sander in Carroll, Iowa, and part-time at their daughter Lois Aumen’s home in Omaha. Their daughter Corinne Heinen, M.D. of Seattle, Washington, provided invaluable medical advice and visited frequently. His marriage to Alice F. Bachmann, was celebrated September 29, 1953 at Sacred Heart Catholic Church in Pocahontas, Iowa, and officiated by their friend, Rev. Jerome Koenig. They made their home near Halbur for six decades until residing with their daughters. He was a member of St. Augustine Parish, and active in the church choir and the Holy Name Society. He was a former director of the Dairy Herd Improvement Association, and served on the Carroll County Extension Board. Warren was always very fond of a good barbershop melody, and a clever O. Henry story. Warren is survived by his wife, Alice; his sister, Evelyn Richards, of Arvada, Colorado; his three daughters and their spouses; ten grandchildren; fourteen great-grandchildren; and numerous nieces and nephews. He was preceded in death by his parents; his siblings, Lester Heinen, Margaret Lammers, and Helen Ansara; and a daughter, Geralyn, who died at birth. Warren is warmly remembered for his considerate nature, his recounting of fine stories, his genuine wit, and his Christ-like generosity. He will be missed by all, especially by his beloved wife, Alice.

The family of Warren Heinen created this Life Tributes page to make it easy to share your memories.

Send flowers to the Heinen family.