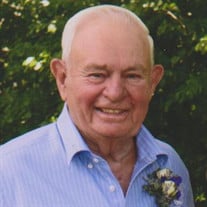 Walt Wiederin, 88 of Carroll, died Thursday, February 28, 2019 at Mercy Hospice in Johnston, Iowa. Mass of the Christian Burial will be celebrated at 10:30 a.m., Tuesday, March 5, 2019 at St. John Paul II Parish-Holy Spirit Church in Carroll. The Celebrant will be Fr. Gary Snyder. Mass Servers will be Jon McCarty and Joshua Tigges. Music will be by Dr. Franklyn Busby, Anne Tigges and the Holy Spirit Resurrection Choir. Lector for the funeral mass will be Ken Nees. Grant Wiederin and Kaylyn Wiederin will present the offertory gifts. Eucharistic Minister will be Arlene Wittrock. Casket Bearers will be: Mike Uhlenkamp, Randy Irlbeck, Kraig Lux, Denny Ludwig, Brett Ludwig and Jim Weber. Burial will be in Mt. Olivet Cemetery in Carroll with military honors conducted by the Carroll American Legion. Friends may call at the Sharp Funeral Home in Carroll after 4 p.m. on Monday, where there will be a rosary at 5 p.m. and a Christian Wake Service at 6:30 p.m. The casket will be moved to Holy Spirit Church on Tuesday morning where additional visitation will be held from 9:30-10:15 a.m. Funeral arrangements are under the direction of the Sharp Funeral Home in Carroll and online condolences may be left for Walt’s family at www.sharpfuneral.com. Born on December 20, 1930, Walter was the son of David and Agnes (Sturm) Wiederin. He attended country school near Scranton and later attended Our Lady of Mt. Carmel School in Mt. Carmel. Walt served in the United States Army from 1952-1954 until his honorable discharge and then returned to the Carroll area. On June 15, 1957, Walt was united in marriage to Dorothy Danner at Sts. Peter and Paul Catholic Church in Carroll, Iowa. Walt and Dorothy lived near Glidden and Carroll for a brief time before making their home near Mt. Carmel. He was a long-time member of Our Lady of Mt. Carmel Parish and was active with the church in various capacities. Walt was also an avid supporter of the Kuemper Catholic School System, a member of St. John Paul II Parish- Holy Spirit Church and the Carroll American Legion. As a lifelong farmer, raising grain and livestock, he still found time for his true passion-fishing. Like his father, he was a skilled carpenter and enjoyed his garden--especially sweet corn, melons and tomatoes. Left to celebrate his life is his wife Dorothy Wiederin of Carroll; his children: Dean Wiederin of Shelburne, VT, Scott Wiederin and his wife Donna of Mt. Carmel, Jill Ruttenberg of Des Moines, Holly (Wiederin) Boattenhamer and her husband Greg of Des Moines, and Julie Beougher and her husband Dan of Maxwell; his grandchildren: Aubrey, Denver, Grant, and Kaylyn Wiederin; his siblings: Delores (Charles) Schaben of Harlan, Florence Dugan of Marshalltown, Jeannie Schaeuble of Des Moines, Jane (Don) Beidler of Carroll, Rita (Bernie) Uckelman of Carroll, and Andy (Rosie) Wiederin of Tucson, AZ; as well as many nieces, nephews, and other extended relatives. Walt was preceded in death by his parents; his son-in-law, Mark Ruttenberg; his siblings: Irma Wiederin, Paul Wiederin, Duane Wiederin, and Vernon Wiederin; his sister-in-law and brothers-in-law: Joe Dugan, Ed Schaeuble, and Jessie (Harold) Hall.

The family of Walter Wiederin created this Life Tributes page to make it easy to share your memories.

Send flowers to the Wiederin family.