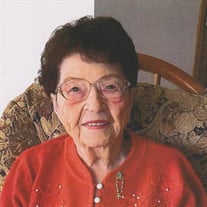 Viola Langel, age 91 of Carroll, died Friday, December 1, 2017, at Regency Park Nursing Home in Carroll. Mass of the Christian Burial will be celebrated at 10:30 a.m. on Thursday, December 7, 2017, at Holy Spirit Catholic Church in Carroll. The Celebrant will be Fr. Kevin Richter. Music will be by Mary Blinn, and Mike Bolton. Lector will be Jennifer Schroeder. Gift Bearers will be Lisa Raner, Pam Wilford, and Sarah Martin. Eucharistic Minister will be Jessica James. Honorary Casket Bearers will be Haley James, Anabel Schroeder, Brady James, and Emma Schroeder. Casket Bearers will be Joel Wilford, Kyle Wilford, Nicole Raner, Amy Raner, Matthew Raner, and Harley Martin Burial will be in Mt. Olivet Cemetery in Carroll. The Carroll Catholic Daughters of the Americas, and the St. Anthony Hospital Auxiliary will form an honor guard for the funeral mass. Friends may call at the Sharp Funeral Home in Carroll after 4 p.m. on Wednesday, where there will be a Carroll Catholic Daughters of the Americas Rosary prayed at 5 p.m., and a Christian Wake Service will be held at 6 p.m. The casket will be moved to Holy Spirit Church on Thursday morning, where visitation will resume at 9:30 a.m., and continue until the time of the funeral mass. Funeral arrangements are under the direction of the Sharp Funeral Home in Carroll, and online condolences may be left for Viola’s family at www.sharpfuneral.com. Born on February 8, 1926 at her family’s home south of Roselle, Iowa, Viola was the daughter of Fred and Mary (Kennebeck) Masching. She attended SS Peter and Paul School in Carroll. After her formal education, Viola helped many families in the area with maintaining their households when the family was in need of extra help. On January 21, 1947, Viola was united in marriage to Simon Langel at SS Peter and Paul Catholic Church in Carroll with Fr. Lambert Schenkelberg officiating. The couple made their home on a farm south of Templeton until December of 1954, when they moved to a farm west of Carroll. Viola lived there until moving to Orchard View in September of 2010. Viola was a devoted homemaker, and helped with the farming operation. In addition, to her tasks at home, Viola also sold Avon Products, and Tupperware. Viola enjoyed playing cards, bingo, casino trips, quilting, ceramics, wintering in Arizona, or Texas, and camping. Viola volunteered in many ways over the years. She served as the dining room chair for SS Peter and Paul Guild, organizing, and managing many dinners that were served for fundraisers in Carroll County, including one when John F. Kennedy was campaigning for president. She was also very active with the St. Anthony Hospital Auxiliary, Legion of Mary, and Royal Rovers Camping Group. As well as the Carroll Catholic Daughters of the Americas, serving in multiple leadership roles, including being a former Grand Regent, in nearly 70 years of membership. Survivors include her children: Judy (Ron) Mayer of Glidden, and Tom (Cindy) Langel of Carroll; five granddaughters, ten great-grandchildren; her sisters: Julie Schmitz of Carroll, Helen Stevens of Carroll, Alvin (Ruth) Masching of Colorado Springs, CO, Marvin (Judy) Masching of Worthington, MN; a sister-in-law: Margaret Murray of Carroll, as well as many nieces, nephews, and other extended relatives. Viola was preceded in death by her husband, Simon on April 21, 2007, her parents, Fred and Mary Masching; her siblings: Alice (Joseph) Stitz, Marian (Albert) Berning, Leon (Dorothy) Masching, and Irene Masching in Infancy; her parents-in-law: Clem and Anna Langel; her brothers-in-law, and sisters-in-law: Alver Schmitz, Marvin Stevens, Henry (Ann) Langel, Clara (Conrad) Bauer, Adolph (Evelyn) Langel, Joseph (Mary) Langel, Mayme (John) Bauer, Regina (Edward) Schlichte, Anna (Langel) Dopheide, Hildegard (Albert) Rupiper, Beatrice Rose Langel in infancy, Edward Langel, Kathryn (Louis) Dopheide, Justina Langel, Vincent Langel, LaVern Murray, and Ted (Bonnie) Langel.

The family of Viola Langel created this Life Tributes page to make it easy to share your memories.