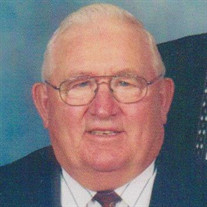 Vincent Leiting, 82 of Westside, died Friday morning, October 21, 2016 at his home near Westside following a long illness. Mass of the Christian Burial will be celebrated at 10:30 a.m. Friday, October 28, 2016 at St. Augustine Catholic Church in Halbur. The Celebrant will be Fr. Steven Brodersen. Music will be by Julie Sibbel and the St. Augustine Choir. Lector for the funeral mass will be Dave Leiting. Gift Bearers will be Erin Langel and Evan Leiting. Eucharistic Ministers will be: Lucille Leiting, Julie Eischeid, and Lois Dentlinger. Casket Bearers will be: Dale Halbur, Bret Halbur, Brian Halbur, Cory Halbur, Matt Halbur, Dan Leiting, Brian Leiting, Doug Leiting, Jerome Riesselman, and Mark Riesselman. Burial will be in the parish cemetery. Friends may call at St. Augustine Church in Halbur after 5 p.m. on Thursday where there will be a Christian Wake Service at 7 p.m. Visitation will resume at 9:30 a.m. on Friday at the church and continue until time of the funeral mass. Memorials may be left at the church for St. Anthony Hospital Pastoral Care or St. Anthony Hospice. Funeral arrangements are under the direction of the Sharp Funeral Home in Carroll and online condolences may be left for Vincent's family at www.sharpfuneral.com. Born on August 24, 1934 at Arcadia, Iowa, Vincent Joseph was the son of Bernard and Caroline (Sanders) Leiting. He attended St. John School and later graduated from Arcadia High School in 1952. On January 4, 1958 Vincent was united in marriage to Alvina Mae Halbur at St. Augustine Catholic Church in Halbur with Fr. Lawrence Greteman officiating. Vincent and Alvina spent their entire married life on the same farm southwest of Westside where they were engaged in grain and livestock farming. Vincent enjoyed searching on the computer about agriculture, politics, current news, and genealogy. He assisted numerous relatives in located their family members both in the United States and other countries. Vincent was proud to have made contact with his family members still in Germany who have records of his ancestors back to the 14th century. He enjoyed all visits with his children, grandchildren, and great-grandchildren and was always interested in their activities and accomplishments. Vincent was a member of St. Augustine Church in Halbur and was also a member of Hayes Township Schuetzen Verein. Vincent is survived by his wife Alvina Leiting of Westside; his children: Roger Leiting of Westside, Dr. Reed (Rachel) Leiting of Worthington, MN, Ann (Bill) Langel of Manning, and Rodney (Stacy) Leiting of Marion; his grandchildren: Dr. Kari Leiting, Dr. Jenni Leiting, Mary Buarapha, Laura Leiting, Sarah Langel, Nicole Langel, Erin Langel, and Evan Leiting; his great-grandchildren: Bentley and Tristan Buarapha; his sister, Bernice Williams of Carroll; his brother, Ronald (Shirley) Leiting of Westside; his sisters-in-law and brothers-in-law: Marie Leiting of Carroll, Jim (Betty) Halbur of Halbur, LeRoy (Donna) Halbur of Manning, Marvin (Patsy) Halbur of Manning, Ivan (Linda) Halbur of Arcadia, and Virginia (LeRoy) Schultes of Templeton; as well as many nieces, nephews, other extended relatives and many friends. Vincent was preceded in death by his parents; his parents-in-law, Albert and Agnes Halbur; his sister, Lucille Riesselman; and his brothers: Harold, Alvin, Loren, and Denis Leiting.

The family of Vincent Leiting created this Life Tributes page to make it easy to share your memories.

Send flowers to the Leiting family.