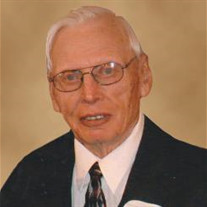 Victor Joseph Wernimont, 86 of Roselle, died peacefully, on Friday, June 23, 2017 at his home near Roselle. Mass of the Christian Burial will be celebrated at 10:30 a.m. Thursday, June 29, 2017 at Holy Angels Catholic Church in Roselle. The Celebrant will be Fr. Steve Brodersen. Music will be by the Holy Angel’s Choir. Lector for the funeral mass will be Rose Behrens. Gift Bearers will be Richard Wernimont and Diane Przepiorski. Eucharistic Minister will be Tom Simons. Honorary Casket Bearers will be: Art and Rose Behrens, Dale and Marilyn Behrens, and Ron and Janet Brincks. Casket Bearers will be: Garold Sorensen, Evan Behrens, Elmer Venteicher, Michael Wernimont, Nicholas Wernimont and Marc Flanagan. Burial will be in Mt. Olivet Cemetery in Carroll. Friends may call at the Sharp Funeral Home in Carroll after 4 p.m. on Wednesday where there will be a rosary at 5 p.m. and a Christian Wake Service at 6:30 p.m. Funeral arrangements are under the direction of the Sharp Funeral Home in Carroll and online condolences may be left for Victor’s family at www.sharpfuneral.com. Born on March 14, 1931 in Carroll, Iowa, Victor Joseph was the son of Joseph and Anna (Kohorst) Wernimont. The family lived in Auburn and then moved to Carroll where he attended St. Lawrence Grade School and later graduated from Carroll High School. On April 15, 1952, Victor was united in marriage to Florence Renze at Holy Angels Catholic Church in Roselle. Victor worked for Heinrich Carpet, laying flooring and also assisted his father grinding feed for farm animals. Later, he and his brother took over the business which was named Twin Feeds. During the same time, Victor was a licensed plumber and was skilled at fixing anything you gave him. If the right part was not available, he would go to his tool shed and make it. Victor also worked with heavy equipment for Jocko Judge digging basements in the Carroll area, earning him the reputation as the best “Cat Skinner” in the area. He then moved to a farm near Roselle and farmed until 1975 when he semi-retired following a trucking accident. A life-long Catholic, Victor was active in Holy Angels Church and also served as a Eucharistic Minister. Victor is survived by his wife of 65 years, Florence Wernimont of Roselle; his children: Richard (Karen) Wernimont of Lidderdale and Diane (Edward) Przepiorski of Sacramento, CA; 4 grandchildren; 5 great-grandchildren; his siblings: Marilyn (Joe) Stahl of California, Shirley Rupiper of Okoboji, Franklin Wernimont of Arizona, and Floyd Wernimont of Colorado; his sisters-in-law: Laura Wernimont of Carroll, Lois Wernimont of Missouri, Donna Wernimont of Texas, and Marian Kuker of Texas; as well as other extended relatives and many friends. Victor was preceded in death by his parents; a son, Victor Jr. in infancy; and his siblings: twin brother, Virgil Wernimont, Clarence Wernimont, Dennis Wernimont, Lois Skalla, and Joseph Wernimont in infancy.

Victor Joseph Wernimont, 86 of Roselle, died peacefully, on Friday, June 23, 2017 at his home near Roselle. Mass of the Christian Burial will be celebrated at 10:30 a.m. Thursday, June 29, 2017 at Holy Angels Catholic Church in Roselle. The... View Obituary & Service Information

The family of Victor Wernimont created this Life Tributes page to make it easy to share your memories.