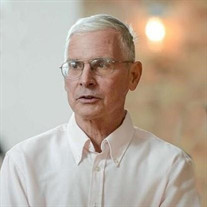 Victor John Hoffman, age 66, of Mt. Carmel, died Tuesday, May 2, 2017, at Arbor Springs Nursing Home in West Des Moines, Iowa. Mass of the Christian Burial will be celebrated at 10 a.m. Friday, May 5, 2017 at Our Lady of Mt. Carmel Church in Mt. Carmel. The celebrant will be Fr. Mark Stoll. Music will be by Kate Cuddy and the Our Lady of Mt. Carmel Choir with Sherry Loughran as cantor. Lectors will be Beth Sheeley, Susan Wilson, and Adam Dentlinger. Gift Bearers will be Theresa Wilson, Martha Schmitz, Rita Boedeker, and Mary Parks. Eucharistic Ministers will be Mike & Theresa Wilson, and Marlene Hoffmann. Casket Bearers will be Kevin Nobiling, Chris Zimmer, Dan Hoffmann, Andy Dentlinger, Scott Wilson, and Chris Boedeker. Burial will be in the parish cemetery. Friends may call at the Sharp Funeral Home in Carroll after 5 p.m. on Thursday, where there will be a Christian Wake Service held at 7 p.m. Funeral arrangements are under the direction of the Sharp Funeral Home in Carroll, and online condolences may be left for Vic’s family at www.sharpfuneral.com. Born on October 8, 1950 in Carroll, Iowa, Victor John was the son of Alfred and Marcile (Thelen) Hoffmann. At a young age he and his family moved to Stuart, Iowa for a brief time before returning to the family farm north of Carroll. He attended Our Lady of Mt. Carmel School, and later graduated from Carroll High School in 1968. On July 19, 1974 Vic was united in marriage to Mary Dentlinger at Holy Spirit Catholic Church in Carroll. In his early years Vic worked as a mechanic at Bruning Oil, and a welder at Toyne’s in Breda. Then, in 1988 Vic acted on his lifelong dream of farming, and the couple moved to their acreage north of Carroll and began their grain and livestock farming operation. He continued his dream until the fall of 2016 when his health declined, and he retired from the farm. Vic enjoyed the farm life. He also enjoyed playing cards, tinkering with cars, and fixing things. Most of all Vic enjoyed his daughters, and always took time to spend time with them. He will be remembered for his passion for farming, and his tireless work ethic. He was a member of Our Lady of Mt. Carmel Parish in Mt. Carmel. Vic is survived by his wife: Mary Hoffman of Mt. Carmel; daughters: Sharon Hoffman of Savage, MN, Christa (Dan) Bina, and their children: Sara, and JJ, of Jewell, and Kim Hoffman of Oakland, TN; his siblings: Myron (Becky) Hoffmann of Carroll, Theresa (Mike) Wilson of Bolckow, MO, Martha (Kelly) Schmitz of Maryville, MO, Rita (Frank) Boedeker of Monticello, MN, and Mary (Denny) Parks of Oskaloosa; his brothers-in-law: Richard (Shirley) Dentlinger of Carroll, and Bob Dentlinger of Carroll, and his sister-in-law: Carol (Tom) Zimmer of Vail; as well as many nieces, nephews, and other extended relatives. Vic was preceded in death by his parents; his sister: Janice Hoffmann, his parents-in-law: Wilbur and Geneva Dentlinger, and his sister-in-law: Judy Brotherson.

Victor John Hoffman, age 66, of Mt. Carmel, died Tuesday, May 2, 2017, at Arbor Springs Nursing Home in West Des Moines, Iowa. Mass of the Christian Burial will be celebrated at 10 a.m. Friday, May 5, 2017 at Our Lady of Mt. Carmel Church... View Obituary & Service Information

The family of Victor Hoffman created this Life Tributes page to make it easy to share your memories.