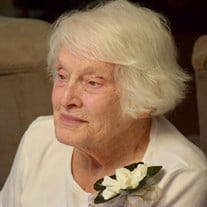 Vera Siemann, 97 of Carroll, died early Tuesday, May 28, 2019 at St. Anthony Nursing Home in Carroll. Mass of the Christian Burial will be celebrated at 11 a.m. Saturday, June 8, 2019 at St. John Paul II Parish – Holy Spirit Church in Carroll. The Celebrant will be Fr. Allan Reicks. Con-Celebrant will be Fr. Timothy Schott. Music will be by Dr. Franklyn Busby, Pastoral Musician, and the Holy Spirit Resurrection Choir. Lectors will be Susan Kanne and Katie Frasor Mourning. Gift Bearers will be Jimmy, Scott, and Thomas Siemann. Casket Bearers will be Greg Siemann, Bill Siemann, Paul Siemann, Jim Siemann, Mark Siemann, Nick Siemann, and Fadjar Budhijanto. Burial will be at 2 p.m. Saturday, at St. Joseph’s Cemetery near Lohrville. Visitation will be held at Holy Spirit Church in Carroll from 9-10:45 a.m. Saturday morning. Funeral arrangements are under the guidance of the Sharp Funeral Home in Carroll, and online condolences may be left for Vera’s family at www.sharpfuneral.com. Vera Jensen Siemann was born May 6, 1922 in Denison, Iowa to Hugo P. and Mary Grace (Mullen) Jensen. Vera graduated from Denison High School in 1940 and attended the Mercy Hospital School of Nursing in Council Bluffs receiving her RN Certification in 1943. She was appointed a Red Cross Nurse and worked at the Jefferson, Iowa hospital during the remainder of WWII. She was able to complete her Bachelor of Science degree from the College of St Francis in 1987. She was united in marriage to Cecil Siemann in Denison, Iowa on August 1, 1945. Cecil and Vera lived on the family farm southeast of Lohrville until 1961 when they moved to Carroll. In 1985 they moved to Boulder, Colorado where they resided until Mr. Siemann’s death in 2007. Vera then relocated back to Carroll for her final years. Vera was an avid reader and always enjoyed traveling. She loved the family’s annual trips to Lake Okoboji. Vera is survived by her children; Gregory (Carolyn) Siemann of Carroll; William (Linda) Siemann of Loveland, Colorado; Joan Frasor of Golden Beach, Florida; Paul Siemann of Denver, Colorado; Mary “Diane” (Burt) Chojnowski of Fairfield, Iowa; James (Lynne) Siemann of San Diego, California; Mark (Sheila) Siemann of Erie, Colorado; Joseph “Nick” (Renely) Siemann of Kailua, Hawaii, Jonathan Siemann of Longmont, Colorado and Fadjar and Kanti Budhijanto of Katy, Texas; and Daughter-in-Law Nona Siemann of Furlong, Pennsylvania, She is survived by 24 grandchildren and 19 great-grandchildren. She was preceded in death by her husband Cecil who died in 2007, her parents, her brother Don and sisters Marie and Betty. She was also preceded in death by daughter Laura who died in 1986, son Christopher who died in 2016 and grandson Kevin Frasor who died in 2014. She was also preceded in death by her son-in-law Thomas Frasor who died in 2011.

The family of Vera Siemann created this Life Tributes page to make it easy to share your memories.

Send flowers to the Siemann family.