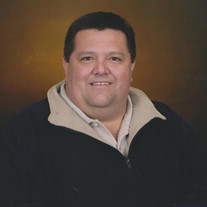 Tom Kruse, 59 of Mesa, Arizona, and formerly of Carroll, died Tuesday, August 10, 2021, at Dignity Health Arizona General Hospital in Mesa, Arizona. A Funeral Mass will be celebrated at 11 a.m., Friday, August 20, 2021, at St. John Paul II Parish – St. Lawrence Church in Carroll. The Celebrant will be Fr. Kevin Richter. Music will be by Jane Heithoff and Kathy Halbur. Lector for the Funeral Mass will be Sue Kruse. Gift Bearers will be Alicia Kruse, Kylee Kruse, and Kendall Cleveland. Honorary Pallbearers will be John Martin, Kevin Pratt, Gary Ellis, Steve Caligiuri, John Amsbaugh, Frank Yacavone and Tom’s nieces and nephews. Burial will be in Mt. Olivet Cemetery in Carroll. Visitation will be held from 9:30-10:45 a.m. on Friday at the church. Funeral arrangements are under the guidance of the Sharp Funeral Home in Carroll and online condolences may be left for Tom’s family at www.sharpfuneral.com. Born in Sheldon, Iowa to Tom and Monica Kruse. He spent his early years in Spencer Iowa before the family moved to Carroll, Iowa. Tom graduated from Kuemper High School in 1980. He was a member of the golf team that played at the State Golf Tournament. He graduated from LaMar University in Beaumont, TX in 1984 with a degree in Finance with honors and was a member of the Men’s Golf Team. He was also a member of a little league all-star team that won in Iowa and eventually lost in Nebraska but was a fun memory of his. After graduation he came back to Carroll and started his career with Norwest Financial that later merged with Wells Fargo Financial which took him to the Des Moines area. Throughout his career with Wells Fargo, he held different positions that led him to move to Sioux Falls, South Dakota, Denver, Colorado, and Las Vegas, Nevada before coming back to Des Moines where his last position was a Senior Vice President of Home Mortgage. He retired after 33 years at the age of 55 and moved to Arizona. Tom cherished time with family and friends. He loved to golf and enjoyed horse races (which his grandpa Emmett Noonan introduced him to). His Fridays were filled with analyzing the horses and getting his bets in. He wanted to see all the major tracks in the United States and four years ago made it to the last one in Saratoga Springs NY. He also enjoyed many golf trips with his brothers and his Uncle Dave Liddell. He loved his group of golf buddies at Echo Valley Country Club in Norwalk and many coworkers having cocktails with them after work. He was a lifetime Iowa Hawkeye fan. He had a big smile and zest for life, and he always seemed to meet new friends everywhere he went. He had tremendous pride for his nephews and nieces - always wanting to hear their interests and giving them career and financial advice. So much so that he recently bought a home back in Carroll to spend more time with his parents and watch the great nephews and nieces in their activities. Tom is survived by his parents, Tom and Monica Kruse of Carroll. Siblings, Jeff (Sue) Kruse of Mesa, Arizona, Tammy (Vern) Coles of Ankeny, IA, Terry (John) Pudenz of Mesa, AZ, Julie Kruse of Dexter, IA, Marg (John) Perrin of Carroll, IA, and Jim Kruse of Carroll, IA. He is also survived by his nephews and nieces, Adam (Ashley) Wuebker, Kendall (Matt) Cleveland, Tyler (Maggie) Redenbaugh, Alicia Kruse, Austin (Hailey) Coles, Kylee Kruse, Noah Kruse, and Dalton (Kate) Perrin. He had eight great nephews and nieces along with many aunts, uncles, and cousins. He is reunited with his brother Joe Kruse in heaven along with his grandparents, Floyd and Jessie Kruse and Emmett and Veronica Noonan. As well as other uncles, aunts, and cousins.

The family of Tom B. Kruse created this Life Tributes page to make it easy to share your memories.

Tom Kruse, 59 of Mesa, Arizona, and formerly of Carroll, died...

Send flowers to the Kruse family.