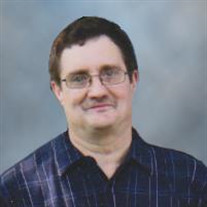 Tim E. Halbur, age 53, of Halbur, died Saturday, October 14, 2017 at his home surrounded by his family, following a courageous battle with cancer. Mass of the Christian Burial will be celebrated at 10:30 a.m. Wednesday, October 18, 2017 at St. Augustine Catholic Church in Halbur. The celebrant will be Fr. Steven Brodersen. Music will be by Julie Sibbel and the St. Augustine Choir. Mass servers will be Kiley Trecker, Nathan Overmohle, and Nolan Overmohle. Lectors will be Kim Bauer, Kenzie Bruch, and Jenna Niehaus. Gift Bearers will be Tasha Hinners, Jenny Yates, Kelsey Pottebaum, Britney Bruch, and Nicole Wirth. Eucharistic Minister will be Pat Sanders. Casket Bearers will be Matthew Bauer, Nathan Halbur, Ryan Halbur, Tyler Trecker, Brett Trecker, Ross Halbur, Chris Halbur, and Cole Halbur. Honorary Casket Bearers will be Jerry Bruch, Rich Vogl, Loren Bruch, Jim Trecker, and Brandon Bruch. Burial will be in the parish cemetery. Friends may call at St. Augustine Church in Halbur after 4 p.m. on Tuesday where there will be a rosary prayed at 5 p.m., and a Christian Wake Service will be held at 7 p.m. Visitation will resume at the church on Wednesday after 9:30 a.m., and it will continue until the time of the funeral mass. Funeral arrangements are under the direction of the Sharp Funeral Home in Carroll, and online condolences may be left for Tim’s family at www.sharpfuneral.com. Tim, the son of Louis and Agnes (Sanders) Halbur was born on February 6, 1964 at Carroll, Iowa. He grew up near Halbur, and attended Halbur-Templeton-Roselle Grade School. Tim then went on to Kuemper Catholic High School where he graduated in 1983. Tim worked at F.A.C. Co-Op in Arcadia for over 20 years until he was diagnosed with cancer in August of 2015. In addition to working at the co-op Tim helped his Dad and brothers with their farming operation. Tim enjoyed fishing, gambling, and festively decorating for the Christmas Holiday. Most of all Tim enjoyed spending time with his nieces and nephews. Tim will be remembered for his selflessness to others, always willing to help out anyone in need. He was a member of St. Augustine Parish in Halbur. Left to cherish Tim’s memory is his father, Louis Halbur of Halbur; his five siblings, and their spouses: Cindy (Matt) Bauer of Templeton, Randy (Renee) Halbur of Manilla, Jean (Bill) Trecker of Roselle, Rodney (Faye) Halbur of Halbur, and Sheryl (Danny) Bruch of Templeton. Also surviving are many nieces, nephews, other extended relatives and friends. Tim was preceded in death by his mother on October 27, 2016; his maternal grandparents: John and Elizabeth Sanders, and his paternal grandparents: Ben and Margaret Halbur.

Tim E. Halbur, age 53, of Halbur, died Saturday, October 14, 2017 at his home surrounded by his family, following a courageous battle with cancer. Mass of the Christian Burial will be celebrated at 10:30 a.m. Wednesday, October 18, 2017 at... View Obituary & Service Information

The family of Tim Halbur created this Life Tributes page to make it easy to share your memories.