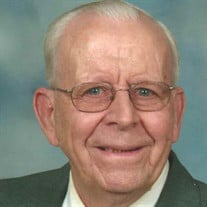 Theodore Meiners Jr., 94 of Carroll, died Saturday, December 9, 2017 at Accura Healthcare of Carroll. Mass of the Christian Burial will be celebrated at 10:30 a.m., Wednesday, December 13, 2017 at St. Lawrence Catholic Church in Carroll. The Celebrant will be Fr. Timothy Schott. Music will be by Kate Cuddy and the St. Lawrence Choir. Lector for the funeral mass will be Barb Regynski. Gift Bearers will be Glenn and Cindy Kerkhoff. Eucharistic Ministers will be Rick and Marilyn Hoffman and Diane Hannasch. Casket Bearers will be: Ron Hoffman, Jim Hoffman, Jerry Hoffman, Rick Hoffman, Dick Regynski, Larry Arkfeld, Dennis March and Jon Schultes. Burial will be at 1:30 p.m. on Wednesday in St. Joseph’s Cemetery in Dedham. Friends may call at the Sharp Funeral Home in Carroll after 4 p.m. on Tuesday where there will be a rosary at 5 p.m. and a Christian Wake Service at 6:30 p.m. The casket will be moved to St. Lawrence Church on Wednesday morning where visitation will resume at 9:30 a.m. and will continue until time of the funeral mass. Funeral arrangements are under the direction of the Sharp Funeral Home in Carroll and online condolences may be left for Theodore’s family at www.sharpfuneral.com. Born on May 21, 1923 at Willey, Iowa, Theodore Meiners Jr. was the son of Theodore Sr. and Anna (Wiskus) Meiners. He spent his younger years in the Willey and Dedham areas and attended St. Mary’s School in Willey. On June 8, 1954 he was married to Nathael (Bierl) Kerkhoff at St. Bernard’s Catholic Church in Breda. The couple lived on their farm northeast of Dedham until retiring in 1991 when they moved to Carroll. He was known in the area for his mechanical expertise, and he repaired lawnmowers in his retirement. Ted and his brother Vic were also members of a competitive target shooting team that traveled statewide to compete in shooting matches. He was a member of the Carroll Rifle and Pistol Club for 20 years. Ted was a member of St. Lawrence Church in Carroll. He is survived by his son, Kenneth Meiners and his special friend Retta Williams of Carroll; his step-son, Glenn Kerkhoff and his wife Cindy of Glidden; his step-daughter, Joleen Kasparbauer and her husband Leo of Carroll; four grandchildren; one great-grandchild; brothers-in-law and sisters-in-law: Marilyn (Ron) Roeder of Arthur, Susan (Marvin) Sporrer of Dedham, LeRoy Bierl of Arizona, and Shirley Eischeid of Carroll; as well as many nieces, nephews, and other extended relatives. He was preceded in death by his parents; his wife Nathael in 2004; his parents-in-law; his daughters: Linda, Karen, Annabel, Donna, and Brenda; his son Kevin; his siblings: Clara Hoffman and Victor Meiners; and his brothers-in-law and sisters-in-law: Floriene (Melvin) Petersen, Rita (Alvin) Haberl, Waunita (Fred) Eischeid, Diane Bierl and Alvin Hoffman.

The family of Theodore Meiners Jr. created this Life Tributes page to make it easy to share your memories.