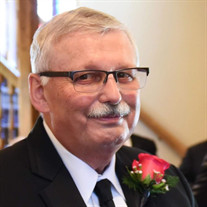 Steve Smith, age 71, of Algona, died Saturday, February 27, 2021 at Mercy One Medical Center in Des Moines surrounded by his family after a brief illness. Mass of the Christian Burial will be celebrated at 10:30 a.m. Wednesday, March 3, 2021 at St. Cecelia Catholic Church in Algona. The celebrant will be Fr. Edward Girres assisted by Deacon Bill Black. Music will be provided by Ellen Gatton and Virginia Schulte. Lector will be Steve’s niece Kate Schwenke. Eucharistic Minister will be Kyle Sheppard Smith. Casket Bearers will be members of the Kossuth County Sheriff’s Office and Iowa State Patrol: Roger Fisher, Mike Sankey, Chuck Robinson, Jake Radmaker, Mark McGregor, Keith Briggs, Brian Runneberg, Will Summers, Matt Holmquist, and Josh Missman. Burial will be at Calvary Cemetery in Algona. Visitation will be held from 5-7 p.m. Tuesday at Oakcrest Funeral Services in Algona. There will be no visitation prior to the funeral mass on Wednesday morning. Those in attendance of Steve’s services are required to wear a face covering and abide by social distancing guidelines. A livestream of Steve’s mass will be available at the Five Saints Catholic Community (St. Cecelia Church) YouTube Channel at https://www.youtube.com/user/stceceliaalgona. The committal service will be livestreamed on Oakcrest Funeral Services Facebook Page at https://www.facebook.com/oakcrestfuneralservices/. Funeral arrangements are under the guidance of the Sharp Funeral Home in Carroll, with assistance of Oakcrest Funeral Services in Algona. Online condolences may be left at www.sharpfuneral.com or www.oakcrestfuneralservices.com. Steven Howard, the son of Howard and Marian (Walsh) Smith was born on December 27, 1949 at Hampton, Iowa. He grew up on a farm outside of Alexander and the family later moved into the Hampton Community. While growing up Steve was active in the Boy Scouts earning his Eagle Scout Award. He graduated from Hampton High School in 1968. While in high school Steve was active on the football team as well as very active in Chorus. Steve enrolled at Luther College in Decorah and graduated with a Bachelor’s Degree in Physical Education with a minor in music in 1972. Given the teaching market in the early 1970’s teaching positions in education were tough to come by. Steve took a firefighter and first responder job in Oelwein. While at a department meeting, the chief of police was at the meeting and approached Steve about being a patrolman. Little did Steve know this would begin a law enforcement career lasting over 43 years. Steve worked his way up to Sergeant of the Oelwein Police Department before taking a patrolman position with the Algona Police Department in 1975. It was here he met his future wife Deb Sheppard, also employed with the Algona Police Department as a Meter Maid. After a brief stint as a patrolmen Steve accepted a commission as Special Agent for the Chicago Northwestern Railroad Police, positioned in Omaha. On June 3, 1978 Steve was united in marriage to Deb Sheppard at St. Cecelia Catholic Church in Algona. The couple made their home in Omaha for two years. After facing a transfer to Chicago, Steve and Deb decided it would be best to return to Algona. Steve was hired by Sheriff Chuck Day of the Kossuth County Sheriff’s Office in 1980. Steve and Chuck would become great friends, a lasting friendship until Chuck’s passing in 2009. Steve enjoyed a long career with the Kossuth County Sherriff’s department raising to the rank of Chief Deputy. He retired in 2015. Some of his greatest enjoyments during his law enforcement career was visiting with people, especially every year at the Kossuth County Fair; as well as associating with his colleagues from all over the Midwest at many L.E.I.N. and M.O.C.I.C. Conferences. Steve’s love for law enforcement limited his time for hobbies; however, he enjoyed traveling, especially taking cruises and numerous trips to Duluth, Minnesota. Although Steve didn’t enjoy sports, he did enjoy watching his children and grandchildren in their sports. He also enjoyed the Professional Bull Riders, attending various events, and watching the events on TV every weekend. In addition to their active faith, Steve and Deb meticulously cared for the Calvary Cemetery Grounds, often putting off family events to make sure the cemetery grounds were maintained to the best possible condition. Steve was a member of the 4th Degree Knights of Columbus and St. Cecelia Catholic Church. Left to celebrate Steve’s life is his wife Deb Smith of Algona. Children: Anne (Mike) Magruder and son Noah of Ft. Dodge; Grant (Theresa) Smith and their children Kaleb and Sophia of Algona; Kyle Sheppard (Katie) Smith of Breda; Steve’s mother Marian Smith of Sun City West, AZ; his siblings: Gary (B.J.) Smith of Surprise, AZ, Sue (Paul) Stuempfig of Tucson, AZ, and Sandy (Dick) Ward of Cedar Rapids; his sisters-in-law and brothers-in-law: Diane (Bruce) Schwenke of Grand Junction, CO, Donna (Kim) Passick of Canton, SD, and Brenda (Brian) Groskreutz of Kearney, NE; as well as many nieces, nephews, other extended relatives, and close colleagues in law enforcement. Steve was preceded in death by his father, Howard Smith, a brother, Larry Smith, born silent, his mother-in-law and father-in-law: Duane “Bud” and Phyllis Sheppard, and his close companion, Retired Police K9 Officer, Jet.

Steve Smith, age 71, of Algona, died Saturday, February 27, 2021 at Mercy One Medical Center in Des Moines surrounded by his family after a brief illness. Mass of the Christian Burial will be celebrated at 10:30 a.m. Wednesday, March 3, 2021... View Obituary & Service Information

The family of Steven H. Smith created this Life Tributes page to make it easy to share your memories.

Send flowers to the Smith family.