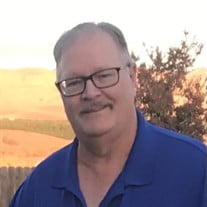 Steve Kock, 68 of Carroll, died early Wednesday morning, May 11, 2022, at Journey Senior Services in Carroll. A visitation will be held from 3-6 p.m. on Saturday, May 14, 2022, at the Sharp Funeral Home in Carroll. Following the visitation, Steve’s family invites everyone to a Celebration of his life and hors d’oeuvres in the Sharp Center next to the funeral home. Funeral arrangements are under the guidance of the Sharp Funeral Home in Carroll and online condolences may be left for Steve’s family at www.sharpfuneral.com. Steve was larger than life but the littlest of the three Kock brothers. The little Cookie was brought into this world on June 25, 1953, by his parents Don and Leona Kock. He left this world on May 11, 2022. He grew up on the family farm near Lanesboro, Iowa. He graduated as valedictorian of Lohrville High School in 1971. He then attended Buena Vista College earning a Bachelor of Science in biology. He also graduated from the Iowa Law Enforcement Academy. Steve honorably served the public as a police officer in Storm Lake, Iowa, where he met his future wife Jane Schrier, and began a family. They eventually moved to Coralville, Iowa where Steve continued his career as a police officer. Steve then transitioned from law enforcement to a long career in banking throughout west-central Iowa. He found great pride and purpose helping so many members of the community with their financial needs. The family has lived for most of the last 40 years in the Carroll area. Steve shared his passion for sports with as many members of the community as possible as a flag football and junior high football coach, then later as a high school tennis coach for Kuemper. He found his true calling in sports journalism later in life as a color commentator on the radio for local football, baseball, and basketball games; a photojournalist and freelance sportswriter for newspapers; and as videographer, writer, and on-air personality for Midwest Sports Weekly. As a final act of generosity, Steve donated his brain for dementia research at the University of Maryland. He is survived by many who love him, beginning with Jane (whom he met when she failed him on a motorcycle driving test…but agreed to a first date tennis match!). His daughter Onica Ulveling (who he taught to love baseball, the Yankees, to appreciate pop culture, fostered her independence and supported her as she earned her doctorate.) her husband Kyle (who barely passed Steve’s test, most likely by sharing his love for Iowa Hawkeye Sports), and his grandsons Jack (who inherited his love of sports), and James (who inherited his love of music and movies). His son Tyler (who inherited Steve’s love of golf, baseball, aviation, and followed in Steve’s footsteps of public service as a civilian employee of the Federal Government) and his wife Megan (who shared Steve’s love of football and cherishes the memories of game day at Green Bay and Iowa State University). His favorite sister Kathy Law, her husband Dave, and his sister-in-law Deb Kock. He is also survived by many other family members whose company he greatly enjoyed. Steve was preceded in death by his parents and brothers Mike and Ron (the big Cookies).

Steve Kock, 68 of Carroll, died early Wednesday morning, May 11, 2022, at Journey Senior Services in Carroll. A visitation will be held from 3-6 p.m. on Saturday, May 14, 2022, at the Sharp Funeral Home in Carroll. Following the visitation,... View Obituary & Service Information

The family of Steve Kock created this Life Tributes page to make it easy to share your memories.

Send flowers to the Kock family.