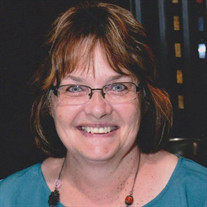 A Celebration of Shirley's Life will be held on Saturday, May 8th (Vic & Shirley’s 45th Wedding Anniversary) at the Arcadia Legion Hall at 11:00 AM (doors open at 10:30). All family and friends are welcome to come, visit with the family and share their favorite memories of Shirley. There will be a short program followed by lunch. Great was the sorrow of her loved ones Sunday evening, January 10, when Shirley Tomka passed away at home. It was only ten weeks ago that she was brought to the Mayo Clinic in Rochester, MN in the hopes that an operation would give her a continued lease on life. However, after the operation, she did not improve. She returned home on November 25th and was cared for by her devoted husband, loving children and grandchildren and selfless siblings and friends. Shirley’s condition grew critical on Friday, January 8th. Her family was at her bedside as she peacefully slipped away from this life into eternal life with God. On February 1, 1955, Shirley was born at St. Anthony’s Hospital in Carroll, Iowa to parents Ted and Bonnie Langel. She was raised with seven sisters and two brothers on a farm south of Templeton. Shirley attended Sacred Heart Catholic School in Templeton and Kuemper Catholic High School in Carroll. She graduated as part of the class of 1973. In May 1976, Shirley received her RN from Nebraska Methodist School of Nursing. On May 8, 1976, Shirley was united in marriage to Victor J. Tomka at Sacred Heart Catholic Church in Templeton. Shortly afterward, Vic and Shirley purchased a farm southeast of Arcadia. To the union was born four children. The living who mourn the death of their mother and mother in-law are two sons, Joe (Kelly) Tomka and Mike (Angela) Tomka and two daughters Sara (Jeff) Anderson and Julie (John) Bittner. Grant, Olivia, Ben, Alyssa, Eva, Haley, Kylie, Austin, Jarett, Ivonne, Jack, Parker, Cooper, Tate, and Anna will forever mourn the loss of their beloved Grandma Shirley. Shirley was a loving sister and aunt to Ron (special friend Linda) Langel, Pat Langel, Donna Langel, Joey Langel, Carol Jean Seddon, Diane Rafferty, Kathy (Dale) Schechinger, Laurie (Mark) Mikkelsen and 26 Langel nieces and nephews. In-laws Barb (Todd) Phillipe, Ed (Joni) Tomka, Teresa Adams-Tomka, Carole Tomka, Cathy Malone, Mary Ann (John) Kemper and 20 Tomka nieces and nephews also mourn her death. Shirley was preceded in death by two unborn angel grandbabies, her brother Bobby, parents Ted and Bonnie Langel, in-laws Vic Sr. and Mary Tomka, brother-in-law Jim Tomka and niece Elizabeth Tomka. In the death of Shirley, our community loses one of its most respected caregivers. She had labored long and well in her nursing career. Shirley worked full-time at St. Anthony’s Hospital for several years while raising her family. Shirley shared her gift of nursing and compassion toward others in multiple capacities at St. Anthony’s. She worked in surgery, the emergency room, with those needing in-patient care and with nursing home residents. Shirley also worked as a travelling nurse for the American Red Cross. Although she loved her job with the Red Cross, she left that position to work as the Occupational Plant Nurse at Pella Corporation in Carroll in order to be close to her father during his battle with cancer. In the final years of her parents’ lives, Shirley was a devoted and loving caregiver to them. Shirley retired in 2018. Her zest for life and commitment to service led her to spend her time after retirement serving the community at New Hope Village Bargain Shoppe. Shirley relished visiting with coworkers and customers and regaling them, and others, with stories. In heaven, Shirley’s labors will be rewarded, and she will enjoy a rest from her life well lived. Shirley was an active member of St. John’s Catholic Church in Arcadia. She served her parish in the capacity of lector, greeter, usher and in the choir. Her dedication to the community also included volunteering at Red Cross blood drives and donating gallons of blood and plasma to countless others. Most recently, Shirley was able to experience true joy and rest from her lifetime of hard work. With the help of her grandchildren, Shirley raised chickens, turkeys, and a rabbit. She planted and tended to a vast garden. She graciously shared her homegrown bounty with her family and friends. In recent times, Shirley and Vic traveled to Hawaii and Australia – two unforgettable and exceptional vacations. Shirley also went to Vietnam with her brother Ron and sister Donna in March 2019. She had plans to head to Africa next, having always wanted to go on a safari to see the lions. Vic and Shirley thoroughly enjoyed vacationing. He will cherish these memories with Shirley for years to come. Vic has lost a loving and excellent wife. Joe, Sara, Mike, Julie, and their spouses have lost a kind, dedicated, true mother and friend. Shirley was an exceptionally supportive and indulgent grandmother. Hardly a day went by without her grandchildren by her side. It is a death that is indeed sad. Vic and Shirley’s custom-built dream home will be a lonely one without Shirley’s cheering and kindly presence. The family requests donations in lieu of flowers, made c/o Shirley Tomka to Sharp Funeral Home, 226 W. 8th St. Carroll, IA 51401. The donations will be used to help families with loved ones battling cancer.

A Celebration of Shirley's Life will be held on Saturday, May 8th (Vic & Shirley&#8217;s 45th Wedding Anniversary) at the Arcadia Legion Hall at 11:00 AM (doors open at 10:30). All family and friends are welcome to come, visit with the family... View Obituary & Service Information

The family of Shirley Tomka created this Life Tributes page to make it easy to share your memories.

A Celebration of Shirley&#39;s Life will be held on Saturday, May...

Send flowers to the Tomka family.