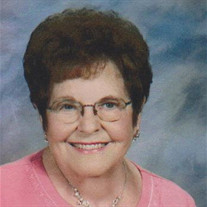 Sheri Dirkx, 85 of Breda, died, Thursday, August 29, 2019 at St. Anthony Regional Hospital in Carroll. Mass of the Christian Burial will be celebrated at 10 a.m., Saturday, September 7, 2019 at St. Bernard's Catholic Church in Breda. The Celebrant will be Fr. Timothy Pick. Special Music will be by Maddie McCann. Lectors for the funeral mass will be: Ted Dirkx and Liz Dirkx. Gift Bearers will be: Jessica Timmons, Andrea Dirkx, Emma McCann, and Sheri Breen. Eucharistic Ministers will be: Kay Reicks, Peg Derner, and Jean Grote. Casket Bearers will be: Kenny Dirkx, Jeremiah McCann, Noah Dirkx, Israel Dirkx, James Dirkx, and Elijah Dirkx. Burial in St. Bernard’s Cemetery in Breda. Friends may call at the Sharp Funeral Home in Breda after 4 p.m. on Friday, September 6, 2019. There will be a rosary at 5 p.m., followed by a Franciscan Secular 3rd Order Service. A Christian Wake Service will be held at 7 p.m. Additional visitation will be held at the Sharp Funeral Home in Breda from 9-9:30 a.m. on Saturday morning. Memorials may be left at the funeral home or the church for St. Bernard’s Church in Breda. Funeral arrangements are under the guidance of the Sharp Funeral Home in Breda and online condolences may be left at www.sharpfuneral.com. Sharyl, “Sheri” Dirkx, the daughter of Jack and Bunny (Holt) Clapper was born on September 8, 1933 on the family farm southwest of Auburn, Iowa. She attended country school and high school in Auburn. She then went on to lab tech training in Minneapolis. On November 23, 1953 Sheri was united in marriage to Kenneth “Fuzzy” Dirkx at St. Mary’s Catholic Church in Auburn. The couple farmed in the Mt. Carmel and Auburn areas. Sheri worked at McCrary Rost Clinic and Stewart Memorial Hospital for over 40 years. Sheri enjoyed quilting, butterflies, her grandchildren, and playing cards. She was involved in Christian Mothers, American Legion Auxiliary, Third Order of Secular Franciscan, Red Hat Society, Les Filles d’Etude, and blood drives. She painted ceramics, dabbled in oil painting, made wedding unity candles, sewed aprons, and crocheting baby blankets. She owned and operated the Victorian Tea Room in Breda. Sheri’s middle name was Salome (peace) which was appropriate for her because she never met a person she couldn’t be friends with. Sheri’s generous nature is a good example by which we could live our lives. Sheri is survived by her children: Bill (Sharon) Dirkx of Alleman, Jill (Steve) McCann of Grand Rapids, MI, Jeff (Ileana) Dirkx of Port Charlotte, FL, Jenny (Duane) Daby of West Des Moines, and Dan Dirkx of Carroll. She leaves 25 grandchildren and 10 great grandchildren as well as her siblings Kay Reicks of Manson, Peggy (Don) Derner of Lake View, Jim (Ann) Clapper of Boston, MA, and Chuck Clapper of Lake View, along with extended family and friends. Sheri was preceded in death by her husband, Fuzzy; her daughter Gina (Dave) Higbee, her parents Jack and Bunny Clapper, sisters: Nan Smart, Jo Bachman; and her brother Neil Clapper. The family would also like to include a thank you to Jim Kennebeck for all his care of mom, Dr. Collision and the staff from St Anthony’s for all their care and comfort.

The family of Sheri Dirkx created this Life Tributes page to make it easy to share your memories.

Send flowers to the Dirkx family.