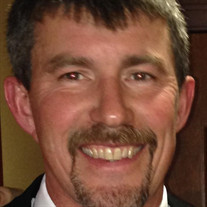 Scott W. Halbur, age 53, of Manning passed away unexpectedly on Saturday, November 19, 2016. Mass of the Christian Burial will be celebrated at 10 a.m., Saturday, November 26, 2016 at Sacred Heart Catholic Church in Manning. The Celebrant will be Fr. John Gerald. Music will be provided by Anne Muhlbauer and the Sacred Heart Choir. Lectors will be Scott’s children: Melissa Yeats and Scott Halbur. Gift Bearers will be Scott’s grandchildren: Valerie, Hannah, Claire, and Anna. Eucharistic Ministers will be Wes and Joyce Dammann and Jim Muhlbauer. Casket Bearers will be Logan Yeats, Collin Clark, Patrick Richardson, Jess Anderson, Scott Halbur, and Darrell Liechti. Honorary Casket Bearers will be Rachel Owen, Al Riesenberg, Dennis Croghan, and Glen Ahrendsen. Burial will be in the parish cemetery. The Manning-Manilla Knights of Columbus will form an honor guard for the funeral mass. Visitation will be at Sacred Heart Church in Manning after 4 p.m. on Friday, and the Manning-Manilla Knights of Columbus will lead the Rosary at 7 p.m. Visitation will resume at the church at 9 a.m. Saturday morning and continue until the time of the funeral mass. In lieu of flowers, the family requests donations are made to Informed Choice of Iowa, a pro-life organization working to eliminate abortion in Iowa. Donations can be made online at www.informedchoiceia.org, or can be mailed to Informed Choice, PO Box 2537, Iowa City, IA, 52244-2537. Funeral arrangements are under the direction of the Sharp Funeral Home in Carroll, and online condolences may be left for Scott’s family at www.sharpfuneral.com. Born on January 25, 1963 in Carroll, Iowa, Scott Walter was the son of Leander and Eileen (Riesberg) Halbur. He graduated from Manning High School with the class of 1981. On August 20, 1983, Scott was united in marriage with Darlys Klocke at St. Joseph’s Catholic Church in Dedham. After their wedding, Scott and Darlys farmed near Dedham until 1988, when they moved to the family farm south of Manning. Scott was a very active member of the community. He was a Eucharistic Minister and active parishioner at Sacred Heart Catholic Church. He was a proud 3rd degree Knight in the Knights of Columbus Council #12438. His countless volunteer hours and tireless efforts led to the Halbur family being name the 2014-2015 Iowa Knights of Columbus Family of the Year. He cherished time with his family; he enjoyed traveling and hiking; he was an expert gardener. Scott will be remembered most for his selfless service to others and his diligent efforts in the pro-life movement. Left to cherish Scott’s life are his wife: Darlys Halbur; his children: Melissa Yeats (Logan), Michelle Halbur (Collin Clark), Amanda Richardson (Patrick), Rebecca Halbur (Jess Anderson), Elizabeth Halbur, and Scott Christopher Halbur; his grandchildren: Valerie, Hannah, and Oliver Clark; Claire, Anna, and Benjamin Yeats; and Baby Richardson. Also surviving are Scott’s mother: Eileen Halbur, and his siblings: Sue DeGard (Dan), Ken Halbur (Pat), Terry Halbur (JoAnne), Kristy Hugeback (Kent), and Carla Hacker (Craig); as well as many nieces, nephews, and other extended family. Preceding Scott in death was his father, Leander Halbur.

The family of Scott W. Halbur created this Life Tributes page to make it easy to share your memories.