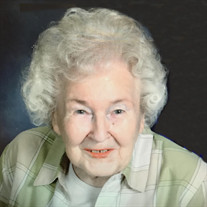 Vivian Ruth Schroeder, or Ruth as she preferred, passed away at the age 95 on the morning of June 22nd at Mercy Hospital in Springfield, Missouri, due to complications of pneumonia. Funeral mass will be held at 10 a.m. on Tuesday, June 26th at Holy Trinity Catholic Church with Msgr. Thomas Reidy, Celebrant, under the direction of Gorman-Scharpf Brentwood Chapel. A visitation will be held from 12-1 p.m., Wednesday, June 27, 2018 at the Sharp Funeral Home in Carroll. Burial will follow in Mt. Olivet Cemetery in Carroll with Fr. Brian Feller officiating. Casket Bearers will be Ruth's family. Funeral arrangements are under the direction of the Sharp Funeral Home in Carroll an online condolences may be left for Ruth's family at www.sharpfuneral.com. Ruth was born in Pittsburg, Kansas to Fred and Clara (Beckley) Severns. Her father, who was initially a coal miner in south-west Iowa, was attending barber school in Pittsburg and became a life-long barber. The family moved to Farnhamville, IA shortly after Ruth’s birth, and Ruth and her sister, Evelyn, grew up there through the depression and World War II, both graduating from Farnhamville High School. Ruth continued the family barber tradition by completing her certification from beauty school in Ft. Dodge, IA and moved to Long Beach, CA to live with her sister and ply her new trade. About a year later, her mother, Clara, fell ill, and Ruth moved back to Farnhamville to help her ailing parent. She met a young man, Virgil Schroeder (just back from the war and working for his father’s road construction business), at a local dance, and they were soon married and moved to Carroll, Iowa. Over the next 11 years, the couple had six sons. Ruth’s life was dedicated to raising her sons, and she loved watching them grow into young men and eventually start families of their own. In 2010, Ruth and Virgil moved to Springfield, Missouri to be closer to family in their declining years. She lived a fulfilling life with and through her family to the end. Ruth was preceded in death by her parents, Fred and Clara (Beckley) Severns, her sister Evelyn Martin of Long Beach, CA, and her husband of 64 years, Virgil Schroeder. She is survived by her Sons Terry and wife Debra of Broomfield, CO, Doug and wife Mary of Omaha, NE, Randy of Springfield, MO, Mark and wife Sylvia of Buda, TX, Craig and wife Judy of Springfield, MO, David and wife Ellen of New York, NY and eight grandchildren and 15 great grandchildren.

Vivian Ruth Schroeder, or Ruth as she preferred, passed away at the age 95 on the morning of June 22nd at Mercy Hospital in Springfield, Missouri, due to complications of pneumonia. Funeral mass will be held at 10 a.m. on Tuesday, June 26th... View Obituary & Service Information

The family of Ruth Schroeder created this Life Tributes page to make it easy to share your memories.

Vivian Ruth Schroeder, or Ruth as she preferred, passed away...

Send flowers to the Schroeder family.