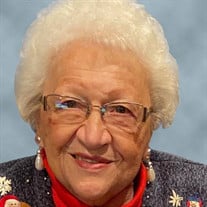 Ruth Diers, 92 of Arcadia, died Thursday, December 23, 2021 at Regency Park Nursing Home in Carroll. Mass of the Christian Burial will be celebrated at 2:30 p.m., Tuesday, December 28, 2021 at St. John Catholic Church in Arcadia. The Celebrant will be Fr. Timothy Friedrichsen. Concelebrant will be Fr. Richard Remmes. Music will be by Sharon Bierl and the St. John Choir. Lectors for the Funeral Mass will be Heidi Elser and Robin Hromadka. Gift Bearers will be Nikki Wagner, Heather Wolf, and Morgan Axman. Eucharistic Minister will be Betty Schmitz. Casket Bearers will be Todd Schroeder, Nick Schroeder, Eric Fischer, Greg Fischer, Matt Wagner, Chad Wolf, Tyler Neary and Cole Neary. Burial will be in St. John Cemetery in Arcadia. Due to Co-Vid, a visitation without greeting the family will be held from 1:30-2:15 p.m. on Tuesday at St. John Church. Funeral arrangements are under the guidance of the Sharp Funeral Home in Carroll and online condolences may be left for Ruth’s family at www.sharpfuneral.com. Ruth, the daughter of Margaret (Eischeid) and Albert Hannasch, was born on December 13, 1929 in Arcadia. She spent her younger years there and graduated at St. Angela Academy in 1947. She and Don Diers were married September 13, 1949 at St. John's church. They lived in Arcadia all their lives until Ruth moved to Orchard View in Carroll when Don passed away in 2014. She was a member of St. John's Choir for 39 years, Eucharistic Minister at church and for homebound people, a member of St John's Guild where she served as president. She also was secretary of St. Johns school board, served on Arcadia senior citizen board, worked as a volunteer at New Hope Village Bargain Shop for 25 years and took meals to homebound people. She enjoyed playing bridge, games and socializing with friends. Survivors include Deb & Terry Schroeder, Nancy & Mark Wagner, Carol & Mike Fischer, Lori & Curt Wolf and Mary & Don Neary, 13 grandchildren and 19 great grandchildren, sister Donna Murphy, Betty Schechinger and sister in-law Roselyn Diers. Ruth was preceded in death by her husband Don, her parents, her mother and father in-law Art & Loretta Diers, her sister and brother in-law Eileen & Elmer Schmitz, brother in-laws Ed Murphy, Don Schechinger , and Lon Diers, and brother and sister in-law Inez and Darrell Winker.

The family of Ruth Diers created this Life Tributes page to make it easy to share your memories.

Send flowers to the Diers family.