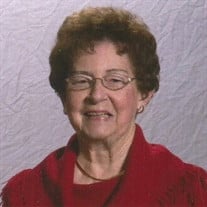 Ruth Ann Stark, 90 of Breda, died Saturday, February 25, 2017 at St. Anthony Nursing Home in Carroll. Mass of the Christian Burial will be celebrated at 10:30 a.m. Thursday, March 2, 2017 at St. Bernard’s Catholic Church in Breda. The Celebrant will be Fr. Mark Stoll. Con-Celebrant will be Fr. Gary Snyder. Music will be by Marilyn Hundling, and the St. Bernard’s Choir. Mass Servers will be Greta Deick, Andrew Deick, and Isaac Ryan. Lectors will be Brittany Miller, Taylor Anderson, and Nick Johnson. Gift Bearers will be Amanda Artrburn, Brenda Deick, Morgan Stark, Melissa Vanderbeek, Paige Dahl, and Hilary Minoria. Eucharistic Ministers will be Brenda Deick, and Chad Mueggenberg. Casket Bearers will be Brian Stark, Eric Stark, Kevin Stark, Craig Stark, Cody Armstrong, Chad Mueggenberg, Kurt Mueggenberg, Nick Johnson, and Mitch Stark. The Breda American Legion Auxiliary will form an honor guard for the funeral mass. Burial will be in St. Bernard’s Cemetery in Breda. Friends may call at the Sharp Funeral Home in Breda after 3 p.m. on Wednesday where there will be a rosary at 4 p.m. and a Christian Wake Service at 6 p.m. Funeral arrangements are under the direction of the Sharp Funeral Home in Breda and online condolences may be left for Ruth Ann’s family at www.sharpfuneral.com. Born on November 10, 1926 at Carroll, Iowa, Ruth Ann was the daughter of Raymond and Mildred (Fee) Brinker. She grew up in the Breda community, and graduated from St. Bernard’s High School. After her schooling Ruth Ann worked a brief time for Ricke’s General Store in Breda. On September 29, 1947, Ruth Ann was united in marriage to Cletus “Billy” Stark at St. Bernard’s Church in Breda. The couple made their home for a short time in Breda before moving to two farm acreages, before they settled on the family farm north of Breda. In April 1973 they built a home in Breda where they remained for many years. Ruth Ann was a devoted homemaker, and farm wife, ensuring that her children, and her husband always came first in her life. Repeatedly, Ruth Ann was known to say “What would I do without you kids?” She enjoyed gardening, playing cards, her desserts, and the Iowa State Cyclones. Most of all she enjoyed the time she spent with her grandchildren, and great-grandchildren. Ruth Ann was an active member of St. Bernard’s Parish, and Woman’s Guild, The National Catholic Order of Foresters, and the Breda American Legion Auxiliary. Ruth Ann is survived by her children: Dr. Dan (Glenda) Stark of Crivitz, WI, Peggy (Peter) Barba of Kyle, TX, Sue (Alvin) Mueggenberg of Arcadia, Dick (Nancy) Stark of Breda, Tom (Joleen) Stark of Carroll, Nancy (Dave) Johnson of Carroll, and Lori (Don) Hagedorn, of Carroll; thirty four grandchildren, fifty-one great-grandchildren; and many nieces, nephews, and other extended relatives. Ruth Ann was preceded in death by her parents; husband Billy in 2007, son, Steve in 2007, two daughters-in-law: Jennifer Stark, and Kim Stark; her grandson: Tyler Hagedorn; and her brother: Robert Brinker. .

The family of Ruth Ann Stark created this Life Tributes page to make it easy to share your memories.

Send flowers to the Stark family.