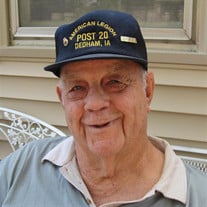 Russell Axman, 87 of Dedham, died unexpectedly on Sunday, May 26, 2019 at his home in Dedham. Mass of the Christian Burial will be celebrated at 10:30 a.m., Friday, May 31, 2019 at St. Joseph’s Catholic Church in Dedham. The Celebrant will be Fr. Kevin Richter assisted by Deacon Louis Meiners. Music will be by Cindy Bauer and the St. Joseph’s Choir. Lector for the funeral mass will be Mindy Giraldo and Morgan Neary. Gift Bearers will be Russell’s grandchildren. Casket Bearers will be: Matthew Schmitz, Mark Schmitz, Josh Axman, Kirby Axman, Jenny Flagler, Bob Sporrer, Gerald “Butch” Golwitzer, Paul Sporrer, Eugene Kasperbauer and Wayne Klocke. Burial will be in St. Joseph’s Cemetery in Dedham with military honors conducted by the Dedham American Legion. Friends may call at the Sharp Funeral Home in Carroll after 5 p.m. on Thursday where there will be a Christian Wake Service at 7 p.m. The casket will be moved to St. Joseph’s Church on Friday morning where additional visitation will be held from 9:30-10:15 a.m. Funeral arrangements are under the direction of the Sharp Funeral Home in Carroll and online condolences may be left for the Axman family at www.sharpfuneral.com. Born on October 15, 1931 at Dedham, Iowa, Russell was the son of William “Jim” and Lena (Theulen) Axman. He attended St. Joseph’s Grade School and later graduated from Carroll High School where he lettered in football. Russell served in the United States Navy from 1952-1954. While in the Navy he was married to Freda Kasperbauer at the Naval Air Force Base in Norman, Oklahoma. Upon his honorable discharge the couple returned to Dedham. Russell was employed with Axman Construction and following the passing of his father, Jim Axman, he became the manager of the business. In 1986, Russell and Freda purchased the business which they owned and operated until their retirement. Russell served as mayor of Dedham for 26 years; was active with the booster club, Dedham American Legion, and St. Joseph’s Church. For the centennial parades, Russell was captain of the Good Ship Lollipop and King Kamehameha. He enjoyed trips to the casino, hosting family gatherings and loved attending his grandchildren’s activities. Russell is survived by his wife Freda Axman of Dedham; his children: Pam Schmitz of Omaha, Bill Axman of Carroll and Terry Axman and fiancé Lisa Adams of Carroll; 7 grandchildren; 5 great-grandchildren; his sisters: Marcy (John) Cook of Carroll and Carol Ann Axman of Dedham; his sister-in-law, Sharon Grote of Fonda; as well as other extended relatives and many friends. Russell was preceded in death by his parents; his son Rick Axman; his son-in-law, David Schmitz; his daughter-in-law, Patty Axman; his granddaughter, Rhonda Downey; his grandson, Michael Schmitz; and his siblings: John Axman, Shirley Christensen, Mary Klocke, and Joe Axman.

The family of Russell Axman created this Life Tributes page to make it easy to share your memories.

Russell Axman, 87 of Dedham, died unexpectedly on Sunday, May...