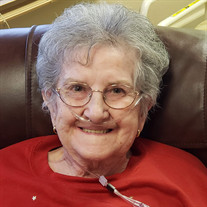 RoseMary “Rosie” Stangl, age 85, of Carroll, died Friday, March 08, 2019, at Regency Park Nursing Home in Carroll. Mass of the Christian Burial will be celebrated at 10:30 a.m. Thursday, March 14, 2019 at St. John Paul II Parish, Holy Spirit Church in Carroll. The Celebrant will be Fr. Brian Feller. Music will be by Dr. Franklyn Busby, Pastoral Musician, and the Holy Spirit Resurrection Choir. Lector will be Lisa Wolterman. Gift Bearers will be Kathy Hiemstra, and Sue Kaltenberger. Eucharistic Ministers will be Patricia Keast, and Florence Oswald. Honorary Casket Bearers will be Rosie’s great-grandchildren: Sophia, Amyra, Jaxson, and Letty. Casket Bearers will be Michael Wolterman, Leo Collison, Jerry Collison, Roger Keast, Doug Hiemstra, and Ken Mueggenberg. Burial will be at 1:30 p.m. Thursday, at St. Joseph’s Cemetery in Dedham. Visitation will be held from 4 until 7 p.m. Wednesday at the Sharp Funeral Home in Carroll. A Rosary will be prayed at 5 p.m. Visitation will resume at Holy Spirit Church on Thursday morning from 9:30 a.m. until 10:15 a.m. Funeral arrangements are under the direction of the Sharp Funeral Home in Carroll, and online condolences may be left for Rosie’s family at www.sharpfuneral.com. RoseMary, the daughter of Leo and Florence (Harmeyer) Collison, was born on August 23, 1933 at Carroll, Iowa. She grew up in Carroll, and attended St. Joseph’s School before graduating from St. Angela’s Academy. Rosie was known by her friends because she love to roller-skate as a teen. After high school, Rosie worked at Woolworths in Carroll. Rosie was united in marriage to Robert “Bob” Stangl on February 4, 1962. Rosie and Bob farmed with Bob’s parents in the Dedham area. On June 14, 1963, they welcomed their daughter, Lisa. Unexpectedly, on September 3, 1963, Bob died due to injuries that occurred when his tractor went off the road. RoseMary moved back to Carroll. Due to her father’s declining health, Rosie moved in with her parents. After her father’s death, Rosie and her mother moved into a house where Rosie stayed until just before she died. Rosie went back to work at Woolworths when she moved back to Carroll. When Woolworth’s closed, Rosie eventually obtained a job at Sernett’s. Many people remember her in the toy department at the Leisure Center part of the store. When Sernett’s closed, she went to work at St. Anthony’s Hospital in the dietary department, but switched to the housekeeping department. After she retired, Rosie became a foster grandparent and worked at the Carroll Area Child Care until her health didn’t allow it. In September of 1995, Lisa was married to Gary Wolterman, son of Wilbur and Helen (Becker) Wolterman. In 2006, Lisa, Gary, and their children (Maria and Michael) moved in with Rosie. As time passed, Rosie welcomed four great grandchildren (Sophia, Amyra, Jaxon, and Letty) into her life. She spent time cooking and knitting. Rosie will be remembered for her Christmas candies and her knitted dish clothes. Rosie leaves behind her daughter, Lisa Wolterman and her husband Gary of Carroll. Her granddaughter Maria of Sioux City. Her grandson Michael, who is still at home. She also leaves behind great-grandchildren: Sophia, Amyra, Jaxon, and Letty all of Carroll. Also surviving is her sister Patricia (Roger) Keast of Omaha, NE; her brothers Frank (Donna) Collison of Lehigh Acres, FL, Jerry (Gladys) Collison of Edmond, OK, and Leo (Eileen) Collison of Chicago, IL; sister-in-Law Donna Ankenbauer of Dedham, IA , Linda (Harlan) Sedivy of Omaha, NE; and Marlyn Stangl of Washington State, as well as many nieces nephews, other extended relatives and friends. She is preceded in death by her husband, Bob; her parents: Leo and Florence Collison; her parents-in-law: Leo and Hilda Stangl. Brother Don and wife Lee, Brother Hank and wife Carol, Bob’s infant brothers, Billie and Arthur, a brother- in-law Dean Ankenbauer; nephew: Henry Leo Collison, and a nephew-in-law Doug Kaltenberger.

The family of RoseMary "Rosie" Stangl created this Life Tributes page to make it easy to share your memories.

Send flowers to the Stangl family.