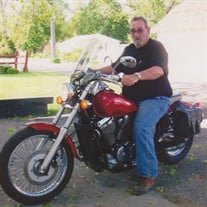 Ronald J. Cleveland, age 75, of Wall Lake, formerly of Carroll, died Monday, May 13, 2019 at the Iowa Veterans Home in Marshalltown, Iowa. A funeral service will be held at 11 a.m. Friday, May 17, 2019 at the Sharp Funeral Home in Carroll, with Fr. Brian Feller of St. John Paul II Parish in Carroll officiating. Military Honors will be conducted by the Carroll American Legion. Visitation will be held at the Sharp Funeral Home in Carroll from 5 to 7 p.m. on Thursday where there will be a Rosary prayed at 7 p.m. Visitation will continue from 10 until 10:45 a.m. on Friday morning. Funeral arrangements are under the direction of the Sharp Funeral Home in Carroll, and online condolences may be left for Ronald’s family at www.sharpfuneral.com. Ronald, the son of Harold and Gwendolyn (Hignett) Cleveland was born on May 5, 1944 at Sioux City, Iowa. He grew up in Carroll, and graduated from Kuemper Catholic High School in 1963. After graduation, Ron enlisted in the United States Marine Corps; proudly and honorably serving in two tours of duty in the Vietnam War. Upon his honorable discharge, he returned to the area and began his career as a GMC Mechanic at Macke Motors in Lake City. On December 29, 1979 he was united in marriage to Candy Kramer in Maple River. Feeling a calling to serve the community Ron began his law enforcement career. Over the years he served as a police officer in Harlan, Deputy Sheriff in Carroll County, and lastly as Chief of Police in Coon Rapids. After his career in law enforcement Ron worked as an over the road truck driver. He enjoyed raising and riding horses, camping, hunting, fishing, and spending time with his family. Ron is survived by his wife, Candy Cleveland of Wall Lake; his children: Ronald J. Cleveland Jr. of Westside, Wendy Meischeid of Wall Lake, Tony Stonerook of Wall Lake, Chris (Crystal) Cleveland of Jewell, and Jamie Cleveland of Nevada; 16 grandchildren, 2 great-grandchildren; a sister, Nancy (Gus) Macke of Lake City; sister-in-law Gedget (Tony) Bauer of Ida Grove; brother-in-law: Audie (Peggy) Kramer of Wall Lake, as well as nieces, nephews, and other extended family members. Ron was preceded in death by his parents, Harold and Gwen Cleveland; parents-in-law: Loren and Patricia Kramer; and two nephews, Jason Macke and Mike Macke.

Ronald J. Cleveland, age 75, of Wall Lake, formerly of Carroll, died Monday, May 13, 2019 at the Iowa Veterans Home in Marshalltown, Iowa. A funeral service will be held at 11 a.m. Friday, May 17, 2019 at the Sharp Funeral Home in Carroll,... View Obituary & Service Information

The family of Ronald J Cleveland created this Life Tributes page to make it easy to share your memories.

Send flowers to the Cleveland family.