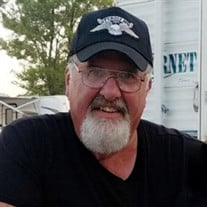 Ron Venteicher, age 66 of Carroll, died on Wednesday, July 28, 2021 at Mercy Medical Center in Des Moines. A Funeral Service will be held at 10:30 a.m. on Wednesday, August 4, 2021 at the Sharp Funeral Home in Carroll. Fr. Andrew Hoffmann will preside over the service. Honorary Casket Bearers will be Elmer Venteicher, Roy Janssen, Louie Glass, Brian Mentzer, Gary Bellinghausen, and Spike Underberg. Casket Bearers will be Ron Meiners, Tage Henkelman, Doug Bass, Mike Brincks, Vinnie Riesselman, and Hunter Meyers. Burial will follow in the Carroll Cemetery. A visitation will be held on Tuesday from 4:00 p.m. until 7:00 p.m. at the funeral home. Memorial contributions may be directed to Ron's family to be used for designation that will be decided at a later date. Arrangements are under the guidance of the Sharp Funeral Home in Carroll, and online condolences may be left for Ron's family at www.sharpfuneral.com. Born on December 4, 1954 in Sioux City, Ron was the son of Lloyd and Anna (Hoffman) Venteicher. He attended Carroll School District, graduating from Carroll High School in the early 1970s. On January 19, 1974, Ron Married Donna Loneman at St. Francis Catholic Church in Maple River. This union was blessed with the birth of 6 children. Ron worked numerous jobs throughout his life. He helped on his family farm while he was growing up, he worked for Badding Construction, Bob’s Circle Steel, and for the city of Carroll for 20 years. Early on in the 1970s though, Ron began his own business: Ron’s Cabinet Shop. He enjoyed working with his hands and fixing whatever needed fixed. From the age of 4-months old, Ron had been a citizen of Carroll. He loved his community. Ron was also a man who loved everything under the sun. From driving out to the farm, to spending time around his 40+ year old gold fish pond, Ron loved life. But it wasn’t just what he saw around him, but the people he spent it with. Ron enjoyed having breakfast with the local police officers and then going to have coffee with a group of friends after. He was a man who knew no stranger. He enjoyed videotaping weddings, social events funerals, etc. for his company D&R Video, bringing home animals to his family, his trailers, and his skid loader. But he loved his family the most. Dancing, singing, and joking around with his grandkids brought so much joy to his face. Ron will be missed by everyone who knew him. Those left to cherish his memory include his wife of over 47 years, Donna of Carroll; his children Jason (Tracy) Venteicher of Carroll, Stacie (Chad) Riesselman of Carroll, Corey Venteicher of Carroll, Laura (Corey) Meyers of Carroll, Ashley (Mark) Meiners of Carroll, and Amber (Justin) Huegerich of Carroll; 15 grandchildren: Cassie, Vinny, Hannah, Hunter, A.J., Julie, Audrey, Hayden, Lucie, Allison, Rylan, Macie, James, Jordin, and Jared; sister Donna (Clarence) Matthews of Pennsylvania; nephew Ryan Himes; other family members and a multitude of friends. He was preceded in death by his parents, his grandson Kyle, his parents-in-law Lawrence and Darnella Loneman, and a nephew Johnny Himes.

The family of Ron Venteicher created this Life Tributes page to make it easy to share your memories.

Send flowers to the Venteicher family.