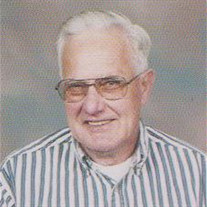 Romayne “Romey” Wittry, age 85, of Breda, died Thursday, February 22, 2018 at Regency Park Nursing Home in Carroll. Mass of the Christian Burial will be celebrated at 10:30 a.m. Monday, February 26, 2018 at St. Bernard’s Catholic Church in Breda. The celebrant will be Fr. Mark Stoll. Con-Celebrant will be Fr. Gary Snyder. Music will be by Marilyn Hundling, and the St. Bernard Choir. Lector will be Barb Hoffman. Gift Bearers will be Romey’s nieces and nephews. Casket Bearers will be Dave Wittry, Tom Wittry, Dean Wittry, Craig Nieland, Matt Gruhn, and Dick Wittry. Burial will be in the parish cemetery. Friends may call at the Sharp Funeral Home in Breda after 3 p.m. on Sunday. There will be a rosary prayed at 3:30 p.m., and a Christian Wake Service will be held at 5 p.m. Funeral arrangements are under the direction of the Sharp Funeral Home in Breda, and online condolences may be left for Romayne’s family at www.sharpfuneral.com. Born on December 10, 1932 northeast of Breda, Iowa, Romayne was the son of Bernard and Magdalene (Snyder) Wittry. He grew up near Breda, and graduated from St. Bernard’s High School in 1952. After his formal education Romey began farming with his parents. He continued to farm until 2006, when he retired to Carroll. Romey enjoyed collecting toy tractors, and model cars. He also enjoyed attending auctions, cats, and visiting with many people. Romey appreciated tinkering, and fixing anything that needed to be fixed. He was a lifelong parishioner of St. Bernard’s Catholic Church in Breda. Left to celebrate Romey’s life is his siblings: Della Nieland of Manson, Dale (Catherine) Wittry of Carroll, John (Marceal) Wittry of Breda; his sisters-in-law: Joan Wittry of Breda, and Jane Wittry of Allen, TX; as well as many nieces, nephews, and other extended relatives. Romey was preceded in death by his parents, Bernard and Magdalene Wittry; his brothers: Eugene Wittry, and Ken Wittry, and his brother-in-law: Pat Nieland.

The family of Romayne "Romey" Wittry created this Life Tributes page to make it easy to share your memories.

Send flowers to the Wittry family.