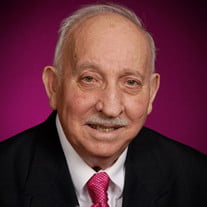 Roland Daniel, 84 of Carroll, died Friday, July 12, 2019 at MercyOne in Des Moines, Iowa. Mass of the Christian Burial will be celebrated at 10 a.m., Thursday, July 18, 2019 at St. John Paul II Parish - St. Lawrence Church in Carroll. The Celebrant will be Fr. Shinoj Jose. Music for the funeral mass will be by Kate Cuddy and the St. Lawrence Choir. Lector will be Shirley Molitor. Roland’s children will present the offertory gifts. Eucharistic Ministers will be: Shirley Molitor, Diane Hannasch, and Jim Eich. Casket Bearers will be: Abigail Esdohr, Kaitlyn Burke, Daniel Burke, Randi Daniel, Mikala Reynolds, Ariel Bertran, and Casey Daniel. Burial will be in Mt. Olivet Cemetery in Carroll with military honors conducted by the Carroll American Legion. Friends may call at the Sharp Funeral Home in Carroll after 4 p.m. on Wednesday where there will be a rosary at 5 p.m. and a Christian Wake Service at 6:30 p.m. The casket will be moved to St. Lawrence Church on Thursday morning where additional visitation will be held from 9-9:45 a.m. Funeral arrangements are under the guidance of the Sharp Funeral Home in Carroll and online condolences may be left for the Daniel family at www.sharpfuneral.com. Born on March 24, 1935 at Carroll, Iowa, Roland was the son of Clayton and Mary (Nees) Daniel. He spent his younger years in the Lidderdale area and graduated in 1953 from Carroll High School. Roland served in the Iowa Army Reserves as Sgt. (E5) and was honorably discharged in 1963. On August 11, 1956, he was united in marriage to Marian Loew at St. James Catholic Church in Madison, Wisconsin. Roland spent most of his working career at Auen Distributing in Carroll where he was employed for over 40 years and never met a stranger. Roland enjoyed woodworking, fixing things, watching the St. Louis Cardinals and traveling with the love of his life, Marian. Survivors include his children: Gary Daniel of Des Moines, Timothy (Leslie) Daniel of Ankeny, Marcy (Tom) Burke of Kearney, MO, Linda (Tim) Rhoades of Polk City, and Cheryl (Doug) King of Coon Rapids; his grandchildren: Randi Daniel, Mikala (Jeremy) Reynolds, Abigail (Ryan) Esdohr, Casey Daniel, Ariel (Bryce) Bertran, Kaitlyn Burke, and Daniel Burke; his great grandchildren: Atlas Esdohr, Cedar Esdohr, Oliver Reynolds, Sawyer Reynolds, Tucker Reynolds, and Birkley Bertran; his siblings: Donna Gehling of Carroll, Larry (Rosemary) Daniel of Lidderdale, Joan (Jerry) Feeney of Council Bluffs, Janice (Mike) Boes of Urbandale, and Bob (Mary) Daniel of Gettysburg, PA; as well as many nieces, nephews, and other extended relatives. Roland was preceded in death by his parents; his wife Marian in 2016; and his brother, John Daniel.

The family of Roland Daniel created this Life Tributes page to make it easy to share your memories.

Send flowers to the Daniel family.