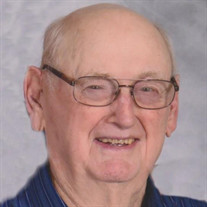 Robert “Bob” Wittrock, age 90, of Mt. Carmel, died Wednesday, March 10, 2021 at his home surrounded by his family. Mass of the Christian Burial will be Celebrated at 10:30 a.m. Tuesday, March 16, 2021 at Our Lady of Mt. Carmel Catholic Church in Mt. Carmel. The celebrant will be Fr. Timothy Friedrichsen with Fr. Gary Snyder serving as the concelebrant. Music will be by Nancy Lemker and Mary Pat Venner. Lectors will be Laura Fara, Diane Dopheide, and Tracy Riesenberg. Casket Bearers will be Matt Wittrock, Ben Wittrock, Blake Gray, Evan Gray, Michael Killeen, and Jason Heuton. Honorary Casket bearers will be Nicole Heuton, Kristin Jorgensen, Heather Wittrock, Jenny Dooley, Erin Maddox, and the spirit of Melissa Wittrock. Burial will follow in the parish cemetery with Military Honors conducted by the Breda American Legion. Visitation without greeting the family will be held from 6 p.m. to 7 p.m. on Monday at the Sharp Funeral Home in Carroll. There will be no visitation prior to the funeral mass on Tuesday morning. Those in attendance of Bob’s services are required to wear a face covering and practice social distancing. In lieu of flowers memorials may be made in Bob's name to the Kuemper Catholic Schools Foundation. A recording of Bob’s funeral mass will be available within 24 hours of his service at the Sharp Funeral Home YouTube Channel at this link: https://www.youtube.com/channel/UCqd2eeRJk5RTdEJoEooUoAQ. Funeral arrangements are under the guidance of the Sharp Funeral Home in Carroll, and online condolences may be left for Bob’s family at www.sharpfuneral.com. Bob was born March 31, 1930 to Frank and Rose (Drees) Wittrock at Halbur, Iowa. He spent his younger years in the Halbur community and attended St. Augustine School. Following his formal education, he went to work helping area farmers. Bob entered the service and fought in the Korean War (1952 – 1954) with the 196th Artillery Battalion for 16 months in Korea. When he returned home, he married the love of his life, Arlene Daniel, on February 21, 1955 at Holy Angels Church in Roselle. He spent several years as a hired hand until he and Arlene were able to farm on their own in 1959. In March of 1971, they bought a farm just north of Mt. Carmel where they raised their children. Bob lived there until his passing. Bob was a member of Our Lady of Mt. Carmel Parish, an usher for the parish, and held an office with the men’s club. He was a member of the Knights of Columbus, was on the Board of Director’s of Roselle Insurance for 30 years and was a member of the Dairy Association from 1959 – 1995. Bob enjoyed playing cards at the “station” (Al’s Corner), going to the casino, attending his children’s and grandchildren’s sporting events, and spending time with family and friends. Bob is survived by his wife of over 66 years Arlene Wittrock of Mt. Carmel; five children: Gary (Marlene) Wittrock of Maple River, Craig Wittrock of Mt. Carmel, Alan (Paula) Wittrock of Breda, Julie (Pat) Gray of Carroll, and Jean (Brad) Killeen of Olathe, Kansas; ten grandchildren: Nicole (Jason) Heuton, Kristin (Corey) Jorgensen, Heather Wittrock, Matthew Wittrock, Jenny (Dave) Dooley, Benjamin (Liz) Wittrock, Blake (Dani) Gray, Evan Gray, Michael (Katie) Killeen and Erin (Ryan) Maddox; thirteen great grandchildren: Aubrey, Mariah and Khloe Heuton, Calvin Jorgensen, Asher Wittrock, Mason, Beckett, and Remi Dooley, Gavin, Braelynn, and Kallum Gray, Henry Killeen, and Morgan Maddox; siblings: Fred (Lucille) Wittrock, Verna Mayer, Harold (Joann) Wittrock, Romen (Verena) Wittrock; sister-in-law: Ann (Bob) Lenz; and many nieces, nephews, cousins, and friends. Robert was preceded in death by his parents Frank and Rose Wittrock; grandchild Melissa Wittrock; siblings and in-laws Raymond Wittrock (infant Brother), Lucina (Wilbur) Truhe, Regina (Clarence) Reineke, Elvera (Andrew) Daniel, Leo Mayer, John Eich, Catherine and Ed Kalkhoff; and mother and father-in-law Catherine and Edward Daniel.

The family of Robert "Bob" Wittrock created this Life Tributes page to make it easy to share your memories.

Send flowers to the Wittrock family.