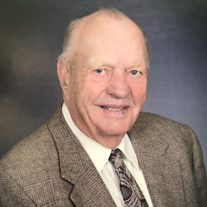 Robert Schweers, age 90 of Carroll and formerly of Arcadia, died Saturday, March 3, 2018 at St. Anthony Nursing Home in Carroll. Mass of the Christian Burial will be celebrated at 10 a.m., Wednesday, March 7, 2018 at St. Lawrence Catholic Church in Carroll. The Celebrant will be Fr. Brian Feller. Con-Celebrants will be Fr. Richard Remmes and Fr. Edmund Tiedeman. Music will be by Kate Cuddy and the St. Lawrence Choir. Lector for the funeral mass will be Rita Hughes. Gift Bearers will be Bob’s grandchildren: Alison, Katie, and Robert Schweers. Casket Bearers will be: Dale Schweers, Ralph Lampman, Tom Schweers, Jim Allen, Larry Wolterman, and John Mulholland. Burial will be in St. John’s Cemetery in Arcadia with military honors conducted by the Arcadia American Legion. Friends may call at the Sharp Funeral Home in Carroll after 4 p.m. on Tuesday where there will be a rosary by the Carroll Knights of Columbus at 5 p.m. and a Christian Wake Service at 7 p.m. The casket will be moved to St. Lawrence Church on Wednesday morning where visitation will resume at 9 a.m. and will continue until time of the funeral mass. Memorials may be left at the funeral home or the church for Kuemper Catholic Schools Foundation. Funeral arrangements are under the direction of the Sharp Funeral Home in Carroll and online condolences may be left for Bob’s family at www.sharpfuneral.com. Born on July 18, 1927 at Arcadia, Iowa, Robert was the son of Herman and Cecilia (Pape) Schweers. He spent most of his lifetime in the Arcadia area and attended St. John’s School. On February 28, 1949, Bob was united in marriage to Velma Sieve at St. Lawrence Catholic Church in Carroll. Bob and Velma made their home north of Arcadia where he farmed and also served in the Army Reserves for several years. Following his retirement the couple moved to Carroll. Over the years Bob and Velma enjoyed attending ballroom dances as well as golfing. He also enjoyed hunting and stayed active with the Arcadia American Legion and St. John’s Parish. Bob served on numerous boards including the Kuemper Catholic Schools Foundation and was a past president of Carroll County Beef Producers and Arcadia Telephone Company when they went from party line to single party dial phone. Bob was a lifelong member of St. John’s Parish, and was currently a member of St. Lawrence Parish and the Arcadia American Legion. Bob is survived by his wife, Velma Schweers of Carroll; his son, Curt Schweers and his wife Lynette of Arcadia; his grandchildren: Alison Schweers, Katie Schweers, and Robert Schweers; his sisters-in-law and brothers-in-law: Adrienne Schweers of Kansas City, Earl Boes of Carroll, Alan Sieve of Maryville, TN and Linda (Bill) Allen of Omaha, NE; as well as many nieces, nephews, and other extended relatives. Bob was preceded in death by his parents: his sisters: Marcella (Albert “Buddy) Berger, Viola (Edward) Lampman, Alice Boes, and Charlotte Schweers; and his brothers: Clarence (Teresa “Babe”) Schweers, Joseph (Ethel) Schweers, Leo (Mary Frances) Schweers, Vincent (Helen) Schweers, Art (Mabel) Schweers, and Albin Schweers.

The family of Robert Schweers created this Life Tributes page to make it easy to share your memories.

Robert Schweers, age 90 of Carroll and formerly of Arcadia, died...

Send flowers to the Schweers family.