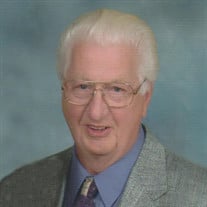 Robert Sapp, age 84, of Carroll, died Tuesday morning, February 14, 2017 at St. Anthony Regional Hospital in Carroll. Mass of the Christian Burial will be celebrated at 10 a.m. Saturday, February 18, 2017 at St. Lawrence Catholic Church in Carroll. The Celebrant will be Fr. Craig Collison. Music will be by Kate Cuddy and the St. Lawrence Choir with Sherry Loughran as Cantor. Lector will be Jacob Snyder. Gift Bearers will be Chelsey Sapp, Amanda Burt, and Miranda Gerding. Eucharistic Minister will be Becky Snyder. Casket Bearers will be Joshua Sapp, Jacob Burt, Christopher Burt, Steve Sapp, Mike Sapp, Larry Gerding, and Robert Burt. Burial will be at Mt. Olivet Cemetery in Carroll. Friends may call at the Sharp Funeral Home in Carroll after 5 p.m. on Friday where there will be a Christian Wake Service at 6:30 p.m., followed by a rosary. The casket will be moved to St. Lawrence Church on Saturday morning where visitation will resume at 9 a.m. until time of the funeral mass. Funeral arrangements are under the direction of the Sharp Funeral Home in Carroll and online condolences may be left for Bob’s family at www.sharpfuneral.com. Born on February 23, 1932 at Carroll, Iowa, Robert was the son of Jelste “J.J” and Marie “Feld” Sapp. On April 23, 1958 he was united in marriage to Dorothy Wegman at St. Lawrence Catholic Church in Carroll. Following their marriage the couple made their home in Carroll. At a young age Bob was offered to go work for John Anderson who owned and operated Anderson’s Shoes in downtown Carroll. He learned the shoe trade from John and his family and later opened his own business when he purchased Kramer Shoes in March of 1962. From the start it was a family business. Bob’s wife Dorothy assisted with the bookkeeping at Bob’s Shoe Repair and his mother Marie also assisted with repairs, sewing and waiting on customers. Bob later turned the business to his son Mike who worked alongside him. Bob loved golfing, bowling, tending to his garden, and always took great pride in his well-manicured lawn. He enjoyed various types of woodworking and for several years assisted with building homes for Habitat for Humanity. Bob was a member of St. Lawrence Church in Carroll. Bob is survived by his children: Marie (Larry) Gerding of Omaha, NE, Mike (Connie) Sapp of Carroll, Trish (Robert) Burt of Ringsted, and Steve (Rosie) Sapp of Carroll; nine grandchildren: Chelsey Sapp, Amanda Burt, Josh Sapp, Chris Burt, Miranda Gerding, Jacob Burt, Brandy Fay, Jennifer Fay, and Adam Fay; his great-grandson, Skyler Goetzinger; his siblings: Janet Parent of Chicago, IL, Mary Steimer of Omaha, Judy Testroet of Carroll, and Linda (Jerry) Schaffer of Ft. Dodge; as well as many nieces, nephews, and other extended relatives. Bob was preceded in death by his parents: his wife Dorothy in August of 2016; his parents-in-law, Henry and Louise Wegman; his siblings: Ruth (Merle) Olberding, Richard (Judy) Sapp, and Ray (Doris) Sapp; and his brothers-in-law, Glenn Steimer and Paul Testroet.

The family of Robert Sapp created this Life Tributes page to make it easy to share your memories.

Send flowers to the Sapp family.