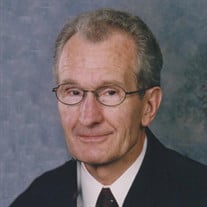 Robert Oswald, age 91, of Carroll and formerly of Harlan, died Saturday, November 13, 2021 at St. Anthony Nursing Home in Carroll. Mass of the Christian Burial will be celebrated at 10:30 a.m. Friday, November 19, 2021 at St. Lawrence Church – St. John Paul II Parish in Carroll. The celebrant will be Fr. Timothy Schott. Music will be by Kate Cuddy and Sherry Loughran. Lectors will be Jenny Sloan, Jolene Vos, Heather Adler, and Andrea Rau. Gift Bearers will be Lindsay Williams and Paige Williams. Eucharistic Minister will be Jane Boes. Casket Bearers will be Nic McCauley, Trevor McCauley, Mat McCauley, Ryan Oswald, Jared Aalbers, Eric Gross, and Garrett Shirbroun. Burial will be at 2 p.m. Friday at the Harlan Cemetery in Harlan. Military Honors will be conducted by the Harlan American Legion. Visitation will begin at 9:30 a.m. on Friday at St. Lawrence Church in Carroll. Funeral arrangements are under the guidance of the Sharp Funeral Home in Carroll, and online condolences may be left for Robert’s family at www.sharpfuneral.com. Robert, the oldest son of Marcellus “Zeke” and Helen (Auen) Oswald was born on April 4, 1930. Robert lived in Breda, Iowa and graduated from St. Bernard’s High School in 1947. Robert served in the United States Navy from 1951-1954 as a Sonarman during the Korean Conflict. Robert married Annette Fleskes on June 25, 1952, the first marriage in the current St. Lawrence Church. Robert and Annette were married for over 69 years. They were able to enjoy their 40th Anniversary at Ft. Robinson, NE, and their 50th and 60th with family. Robert wand Annette settled in Carroll where he learned the carpet and linoleum installation trade and eventually moved to Harlan, Iowa and went into business with Neil Malberg as the Floorcraft Business. Robert and Anette also managed Westridge Apartments. Faith and family were very important to Robert. He was very humble and faithful. He was devoted to the Rosary and committed to the Catholic Church. He was active in the Knights of Columbus and many church functions. He enjoyed crosswords, play cards, and assemble jigsaw puzzles. He and Annette enjoyed traveling to Branson and traveling along the U.S.-Canada Border from East to West. Left to celebrate Robert’s life are his children: Barb (Dick) Aalbers of Monroe, IA, Steve Oswald of Omaha, NE, Craig (Lori) Oswald of Denver, CO, Lori (Mike) McCauley of Adrian, MI, and Julie Shirbroun of Lidderdale, IA; twelve grandchildren; 16 great-grandchildren; his sister: Marilyn (Steve) Millhollin of Franklin, TN; as well as many nieces, nephews, and other extended family and friends. Robert was preceded in death by his wife Annette Oswald on October 7, 2021; two children at birth: Scott and Joni Oswald; his parents: Marcellus and Helen Oswald; and siblings: Tex Oswald and Jim Oswald.

The family of Robert Oswald created this Life Tributes page to make it easy to share your memories.

Robert Oswald, age 91, of Carroll and formerly of Harlan, died...