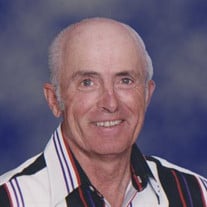 Robert J. Christensen, age 77, of Vail, died Sunday, October 15, 2017, at St. Anthony Nursing Home in Carroll. Mass of the Christian Burial will be celebrated at 10:30 a.m., Thursday, October 19, 2017 at St. Ann’s Catholic Church in Vail. The Celebrant will be Fr. Paul Kelly. Music will be by Irene Feilmeier and the St. Ann’s Choir. Lector for the funeral mass will be Pat Baumhover. Gift Bearers will be Bob’s grandchildren. Eucharistic Minister will be Betty Schwery. Honorary Casket Bearers will be: Jim Mielk, Jim Baumhover, Al Greve, Dale Lenz, Gary Lenz, Joe Gallagher, Mark Schwery, and Don Sporrer. Casket Bearers will be: Mike Mielk, Dave Baumhover, Dale Baumhover, Pat Baumhover, Jeff Gallagher, and John Linberg. Burial will be in St. Ann’s Cemetery in Vail. Visitation will begin at 5 p.m. on Wednesday at St. Ann’s Church in Vail where there will be a Christian Wake Service at 7 p.m. followed by a rosary. Additional visitation will be held one hour prior to the funeral mass on Thursday at the church. Memorials may be left at the church for St. Anthony Hospice. Funeral arrangements are under the direction of the Sharp Funeral Home in Carroll and online condolences may be left for Bob’s family at www.sharpfuneral.com. Robert James Christensen was born on April 29, 1940 at Vail, Iowa the youngest of 4 children to Oscar and Irene (Keating) Christensen. Bob grew up in Vail and graduated from St. Ann’s High School in 1959. He pursued his passion with the airlines and attended Airline Training School, graduating in May of 1967. Shortly after he graduated his father was injured in an accident and Bob returned home to help his father with the farm operation. On June 3, 1973, Bob was married to Sandy Lux at St. Bridget’s Church in Omaha. They made their home on the family farm and were blessed with 4 children: B.J., Lori, Lisa, and Jodi. The couple later separated. Bob was definitely a people person and loved everybody; he especially enjoyed his time with his morning coffee group. He also enjoyed country music, dancing, fishing, hunting and camping. He loved trips to the casinos and taking trips to Las Vegas with his friends. In 1974, Bob began working for Grinnell Mutual as a crop adjuster. He thoroughly enjoyed his job and gave it his all, retiring in 2010. Bob was a member of St. Ann’s Church in Vail. Bob is survived by his children: B.J. Christensen and special friend Deb Loftus of Vail, Lori Sofio and special friend Steven Connelly of Omaha, NE, Lisa (Chris) Nepple of Carroll, and Jodi (Pat) O’Leary of Carroll; 7 grandchildren: Alexis and Ashley Sofio, Nathan, Nicole, and Marissa Nepple, and Kaci and Kolin O’Leary; his siblings: Marie (Jim) Baumhover, Loretta Christensen, and Pat (Jim) Mielk, all of Carroll; as well as many nieces, nephews, other relatives and many friends. Bob was preceded in death by his parents, Oscar and Irene Christensen; his maternal grandparents, James and Nora Keating, his paternal grandparents, Jim and Mary Christensen; a grandson in infancy, Carson O’Leary; and his nephew, Daniel Mielk.

The family of Robert J. Christensen created this Life Tributes page to make it easy to share your memories.

Send flowers to the Christensen family.