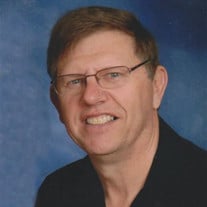 Robert Hoffman, 62, of Audubon passed away on Monday, August 27, 2018 at St. Anthony’s Regional Hospital in Carroll after a short, but hard fought battle from cancer. Mass of the Christian Burial will be celebrated at 10:30 a.m., Friday, August 31, 2018 at St. Joseph’s Catholic Church in Dedham. The Celebrant will be Fr. Brian Feller, assisted by Deacon Louis Meiners. Music will be by Cindy Bauer and the St. Joseph Choir with Jill Sabroske as soloist. Mass Servers will be Brody and Ryder Strother. Lector will be Colee Hayworth. Gift Bearers will be Grace Hoffman, Caleb Hoffman, Sam Hoffman, Levi Hall, Jacob Hall, and Margaret Sabroske. Eucharistic Ministers will be Floyd Klocke, and Donna Ankenbauer. Casket Bearers will be Alex Wittrock, Scott Behrens, Rick Jennings, Jeff Nepple, Mike Klocke, and Tony Hoffman. Burial will be in St. Joseph’s Cemetery in Dedham. Friends may call at the Sharp Funeral Home in Carroll after 4 p.m. on Thursday where there will be a Christian Wake Service at 7 p.m. The casket will be moved to St. Joseph’s Church on Friday morning where additional visitation will be held from 9:15-10:15 a.m. Funeral arrangements are under the direction of the Sharp Funeral Home in Carroll and online condolences may be left for Bob’s family at www.sharpfuneral.com. Robert, “Bob,” was born on December 13, 1955 and grew up on his parents’ farm one and half miles northeast of Dedham. He graduated from Kuemper High School in 1974. Bob married the love of his life, Julie Jennings, on December 6, 1980 at St. Joseph’s Church in Dedham. Bob moved to his own farm eight miles northeast of Audubon in 1979, where he farmed until his death. He was a member of St. Patrick’s Church in Audubon for many years and more recently, St. Joseph’s Church in Dedham where he was a member of the church choir. He was an active member of the Knights of Columbus for many years. Bob loved spending time with family and friends and playing with his six grandchildren. He enjoyed golfing, watching ball games, and playing cards with family and also the guys on Wednesday afternoons. Bob is survived by his wife Julie, and their three children: Erin (Kody) Hall of LaVista, NE, Christopher (Tracy) Hoffman of Dedham, and Jill (John) Sabroske of Aurora, Colorado. Also surviving Bob are his parents, Eugene and Carol Hoffman of Carroll and his sisters Alice Behrens of Audubon and Joan (Rick) Wittrock of Dedham. He was proceeded in death by an infant grandson, Eugene Frank; his father and mother in law, Dr. G.G. and Grace Jennings.

Robert Hoffman, 62, of Audubon passed away on Monday, August 27, 2018 at St. Anthony&#8217;s Regional Hospital in Carroll after a short, but hard fought battle from cancer. Mass of the Christian Burial will be celebrated at 10:30 a.m., Friday,... View Obituary & Service Information

The family of Robert Hoffman created this Life Tributes page to make it easy to share your memories.

Robert Hoffman, 62, of Audubon passed away on Monday, August...