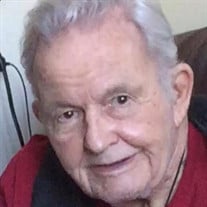 A recording of the cemetery service can be found at this link: https://youtu.be/Il97UjMGs2U Robert Chain, age 90, formerly of Dedham, died Monday, November 02, 2020 at Wesley Acres Retirement Community in Des Moines. A private graveside service will be held on the Chain Family Plot in the Dedham Cemetery, Dedham, Iowa. Funeral arrangements are under the guidance of the Sharp Funeral Home in Carroll and online condolences may be left at www.sharpfuneral.com. Those wishing to mail a memorial may direct it to Robert Chain Family C/O Sharp Funeral Home, 226 W. 8th Street, Carroll, IA 51401. In Memory of Robert “Bob” Charles Chain Robert “Bob” Charles Chain was born December 24, 1929 in Carroll, Iowa. He died November 2, 2020 in Des Moines, Iowa at the age of 90. He is lovingly remembered by his nieces and nephews, Signe Kim Lauridsen-Jones (Ken), Elizabeth “Bunny” Ellen Chain, Hans Omar Lauridsen, Nixon E Lauridsen (Virginia) and Joanne “Pinkee” Lauridsen; his grand-nieces and grand-nephews, Christine Lauridsen Sand (Rob), Andrea Jean Lauridsen, Walter E Lauridsen II, Zachary Lauridsen Jones (Whitney), Augustine Aage William Lauridsen (Brittainey) and Jessica Frances Kirchoff (Tyler) and eight great-grand-nieces and great-grand-nephews. Bob was preceded in death by his parents, Leo “Doc” Williams Chain, M.D. and Jessie Eva Gowen Chain; his sister Frances Chain Lauridsen and his brother William Hamilton Chain. Bob made the world a better place. His family and friends were the beneficiaries of his constant support. He was always there when needed; to celebrate in joyous occasions and or help through difficult times. Bob’s father Doc practiced medicine in Dedham, Iowa for over forty years and delivered many babies safely into the arms of local families. Bob knew all the families in Dedham, Iowa and would visit them yearly, returning from the trips with stories and Dedham bologna for his sister and brother-in-law, nieces, nephews, grand-nieces and grand-nephews. After graduating from Carroll High School, Bob attended Iowa State University and the School of Journalism at the University of Missouri. He then moved to Santa Monica, California where he worked as a produce manager and counted many Hollywood stars as customers. He resided in the Phoenix area during his later years but visited Iowa often throughout his life and held a deep affection for Okoboji. Bob had a special interest in the history of WWII and enjoyed visiting the famous battlefields during his numerous European odysseys. Bob played a central role in the lives of his nieces and nephews, whom he cared for whenever needed. Bob was a constant presence and invaluable helper while his sister Frances and brother-in-law Wally were helping to found Iowa Beef Processors, Iowa Pork Processors, Madison Foods, Boyer Valley Co., Lauridsen Foods, Inc. and American Meat Protein Co. He was also made regular trips to Phoenix to entertain his brother William (Bill). During the last years of Bill’s life, Bob was there to lend his kindness and support to Bill’s daughter “Bunny” (Elizabeth). Uncle Bob will be remembered with great fondness by his grand-nieces and grand-nephews. He joined fishing trips, taught driving lessons, took them trick or treating, gave history lessons, told funny jokes, provided junk food, and even stayed for extended periods when parents needed to be away. The only time of the day when Bob was unavailable was early in the morning when he visited the local coffee shop to hear the latest news from the farmers in town. The family is very grateful for the wonderful team at Wesley Acres who helped care for Bob during the last eight years of his life. While he will be deeply missed, Bob will be loved and honored in our memories.

The family of Robert Chain created this Life Tributes page to make it easy to share your memories.

A recording of the cemetery service can be found at this link:...

Send flowers to the Chain family.