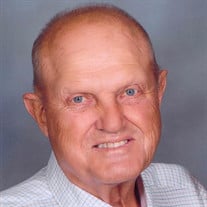 Robert “Bob” Sporrer, 76, of Dedham, IA passed away peacefully in his home surrounded by the love of his family on Tuesday, September 14, 2021. Mass of the Christian Burial will be celebrated at 10:30 a.m., Friday, September 17, 2021, at St. Joseph’s Catholic Church in Dedham. The Celebrant will be Fr. Kevin Richter. Concelebrant will be Fr. Merlin Schrad. Music will be by Cindy Bauer and the parish choir. Mass Servers will be Caleb Hoffman and Sam Hoffman. Eulogist will be Paul Wendl JR. Lectors for the Funeral Mass will be Vicki Rotert, Becky Archunde and Peggy McDonald. Gift Bearers will be Noah, Rylan, Aubrey, and Harrison Sporrer and Caden, Blake, Madden, and Ellasyn Mertes. Eucharistic Minister will be Doris Peterson. Casket Bearers will be Tammy Ozel, Craig Wiederin, Kim Schade, Scott Sporrer, Mike Sporrer, Sarah Peterson, Jeff Sporrer, and Terry Sporrer. Burial will be in St. Joseph’s Cemetery in Dedham with military honors conducted by the Dedham American Legion. Visitation will be held from 4-7 p.m. on Thursday at the Sharp Funeral Home in Carroll. Additional visitation will be held from 9:30-10:15 a.m. on Friday at the church. Funeral arrangements are under the guidance of the Sharp Funeral Home in Carroll and online condolences may be left for Bob’s family at www.sharpfuneral.com. In lieu of flowers, should one desire, memorials may be directed to Kuemper Catholic Schools Foundation or the St. Anthony Hospital Foundation both in Carroll, IA. Bob, known to many as “Bull”, was born on August 17, 1945, in Dedham. The son of John and Bonita (Heithoff) Sporrer, he grew up on the family farm west of Dedham. He graduated from Kuemper Catholic High School in 1963. In 1965, he entered the US Army, serving in Korea during the Vietnam era. His love of the Hawkeyes began when he attended the University of Iowa, graduating in 1972. Along with earning his degree, he played Rugby for the Iowa Hawkeyes. On June 7, 1980, Bob married Linda Rohe at Sacred Heart Church in Manning with Fr. Merlin Schrad presiding. They made their home in Dedham and were blessed with 5 children – their two angels in heaven Kerry and Kenzie, Kyle, Jackie, and Melissa. Bob had a successful 44-year career that he truly enjoyed as a District Sales Manager in the seed industry. Outside of his career, he was active playing slow-pitch softball for the Dedham Merchants, golfing, traveling, hunting, and cheering on the Iowa Hawkeyes. Bob was a servant minded individual volunteering in many roles to support his community, church, and school. He was a member of St. Joseph Parish in Dedham and lifetime member of the Dedham American Legion. He strongly supported the Dedham Booster Club and Kuemper Catholic Schools. Bob served on the Dedham City Council since 1991, the past 4 years as Mayor of Dedham. He will be remembered for his wonderful sense of humor, always deeming himself the “quiet and bashful type”. Bob never let a chance go by to tease the kids or friends and family around him. Bob was a true family man, always putting his family first and supporting his wife, children, and grandchildren – whom he adored. Bob was a very proud Dad, but one of his favorite roles in life was being “Papa” to his eight grandchildren. He always left them saying, “Papa loves you!” Bob left this life with a grateful heart, always counting the blessings the Good Lord gave him. Left to carry on his legacy include: his wife Linda; his children: Kyle (Nikki) Sporrer of Lisbon, IA, Jackie (Mike) Mertes of Dedham, IA, and Melissa Sporrer of Waukee, IA; Eight grandchildren: Noah, Rylan, Aubrey, and Harrison Sporrer, and Caden, Blake, Madden and Ellasyn Mertes. Bob is also survived by his siblings: Don Sporrer, Helen (Ralph) Wiederin, Jim (Kathy) Sporrer, Wayne Sporrer, Paul (Bonnie) Sporrer, Doris (Ron) Peterson, Dale (Jan) Sporrer, and Dick (Sharon) Sporrer; step mother-in-law Vi Rohe, and his in-laws, or as they jokingly were referred to as the “out-laws”: Edna Rohe, Larry (Becky) Rohe, JoAnn Rowedder, Mary Jane (Keith) Stribe, Daryl (Lisa) Rohe, and Janet (Steve) Goecke. He is survived by many Aunts, Uncles, Cousins, Nieces and Nephews. Bob was preceded in death by his twin daughters Kerry and Kenzie Sporrer, parents John and Bonita Sporrer, parents-in-law Vernon and Martha Rohe, brother LaVern Sporrer, sister-in-law Rosie Sporrer, and brothers-in-law Duane Rohe and Allen Rohe.

The family of Robert "Bob" Sporrer created this Life Tributes page to make it easy to share your memories.