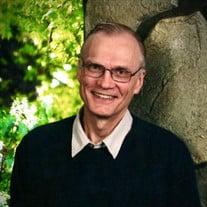 Robert “Bob” Schettler, age 67, formerly of Breda, died Tuesday, July 14, 2020 at Iowa Methodist Medical Center in Des Moines. Mass of the Christian Burial will be Celebrated at 10 a.m. Saturday, July 18, 2020 at St. Bernard’s Catholic Church in Breda. The Celebrant will be Fr. Timothy Pick. Pianist will be Jake Gute. Lector will be Sue Schettler. Burial will be in St. Bernard’s Cemetery in Breda. There will be no public visitation. Those in attendance at the funeral mass will be required to wear face coverings and abide by all COVID-19 Social Distancing Practices. When circumstances allow, a Celebration of Bob’s Life will be held. A livestream link will be provided at the time of the funeral mass by Christ The King Catholic Community Facebook Page at https://www.facebook.com/ChristTheKingCathollicCommunityBredaIowa/. In lieu of flowers, memorials may be directed to the Bob Schettler Memorial Fund C/O Sharp Funeral Home 226 W. 8th Street, Carroll, IA 51401. Funeral arrangements are under the guidance of the Sharp Funeral Home in Carroll, and online condolences may be left for Bob’s family at www.sharpfuneral.com. Bob, the son of Cyril and Marian (Reising) Schettler was born on January 2, 1953 at Carroll, Iowa. He grew up in Breda and graduated from St. Bernard’s High School in 1971. After high school, Bob pursued artistic endeavors in joining his father Cyril in Schettler Studios. On June 10, 1983, Bob was united in marriage to Rosalie Niehaus in Storm Lake. The couple made their home in Breda. Bob served the Breda Community in numerous ways including serving on the Breda E.M.S. and several artistic community projects. He enjoyed gardening, writing, music, art, and bird watching. Bob had been an active member of St. Bernard’s Parish in Breda in the choir with his family, and as a lector, Eucharistic minister, and usher. His family and friends will remember his fondness for learning and music, and his willingness to be at as many of his kids’ performances and concerts as he could. Bob always had an eye for detail and a kind smile for his community. Left to celebrate Bob’s life are his children: Megan (Cody) Schug and their daughter Amelia of Des Moines, Lydia Schettler of Urbandale, Julia (Greg Walker) Schettler of Des Moines, and Evan Schettler, a student at Simpson College. Also surviving are his siblings: Emily (Bob) Morris, Bill (Sue) Schettler, Mary (Paul) LaLiberte, David (Kathy) Schettler, Cecilia (Wesley) Ehrecke; his sisters-in-law and brothers-in-law: Sarah Schettler, Denine Schettler, Greg Niehaus, Chris (Diana) Niehaus, Dave (Marilyn) Niehaus, and Steve (Barb) Niehaus; and his mother-in-law, Mary Niehaus; as well as many nieces, nephews, and other extended family. Bob was preceded in death by his parents; his wife Rosalie on February 11, 2004; his siblings: Milton, Charles (Arlene), Michael, Bernard, and Darrell; and brothers-in-law: Bill Galloway and Jeff Niehaus.

The family of Robert "Bob" Schettler created this Life Tributes page to make it easy to share your memories.