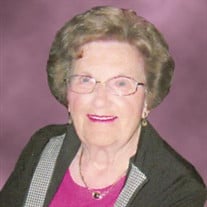 Rita Schettler, 100 of Breda, died early Monday morning, August 17, 2020 at St. Anthony Nursing Home in Carroll. Mass of the Christian Burial will be celebrated at 1 p.m., Thursday, August 20, 2020 at St. Bernard’s’ Catholic Church in Breda. The Celebrant will be Fr. Timothy Friedrichsen. Music will be by Marilyn Hundling. Lectors for the funeral mass will be Jordan Ludwig and Nikki Ludwig. Casket Bearers will be Rita’s grandchildren and their spouses Justin Ludwig, Ryan Ludwig, Brett Ludwig, Holly Schettler, John Herbolsheimer, Laura Herbolsheimer, Jordan Ludwig, and Nikki Ludwig. Burial will be in St. Bernard’s Cemetery in Breda. A livestream of the funeral mass will be available at the time of the service on the Christ The King Catholic Community-St. Bernard’s Catholic Church Facebook Page at https://www.facebook.com/ChristTheKingCathollicCommunityBredaIowa/. There will be no public visitation prior to the funeral mass. Those attending the funeral mass are required to wear a mask and are asked to abide by social distancing Co Vid 19 guidelines. Those wishing to mail a memorial please direct to Rita Schettler Family, c/o Sharp Funeral Home, 226 W. 8th St. Carroll, IA 51401. Funeral arrangements are under the guidance of the Sharp Funeral Home in Breda and online condolences may be left for Rita’s family at www.sharpfuneral.com. Born in Templeton, Iowa on June 3, 1920, Rita was the daughter of Henry and Mary (Ocken) Stevens. At a young age her family moved to Carroll where she graduated from Sts. Peter and Paul School. On March 28, 1951, Rita was united in marriage to Raymond Schettler at Sts. Peter and Paul Church in Carroll. Following their marriage, the couple made their home near Breda where the couple farmed. Rita was a devoted homemaker, housewife, and loved tending to her garden. She often canned the fruits of her labors to share with her family. She was an avid cook and prepared fabulous meals for her family. For many years, Ray and Rita, wintered in Weslaco, Texas where they volunteered for Mexican's Children Refuge in Mexico. She also volunteered with New Hope Village in Carroll. She enjoyed her 500 and bridge card clubs and mom’s night out with ladies from the Breda Community. Rita was a lifelong member of St. Bernard’s Parish, Ladies Guild, and the Catholic Order of Foresters. Rita is survived by her children: Laura Ludwig and husband Dale of Carroll and Ken Schettler and wife Mary Jo of Breda; her grandchildren John (Laura) Herbolsheimer, Justin Ludwig, Ryan (Nikki) Ludwig, Brett (Jordan) Ludwig and Holly Schettler; 4 great-grandchildren; as well as other extended relatives and many friends. Rita was preceded in death by her parents; her husband Ray in 2017; her brothers: Henry Stevens and Edwin Stevens; and her sisters: Frances Taylor, Sr. Sylvia Stevens, Rosella Reynolds, Clara Hoekstra, Genevieve Murray, and Julia Tigges.

The family of Rita Schettler created this Life Tributes page to make it easy to share your memories.