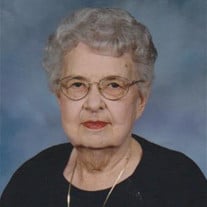 Margaret Murray, 97 of Templeton, died Wednesday, January 30, 2019 at St. Anthony Nursing Home in Carroll. Mass of the Christian Burial will be celebrated at 10 a.m., Saturday, February 2, 2019 at Sacred Heart Catholic Church in Templeton. The Celebrant will be Fr. Steve Brodersen. Music will be by Hannah Warner and the Templeton Men’s Choir. Lector for the funeral mass will be Heather Wernimont and Gene Langel. Gift Bearers will be: Heather Wernimont, Ross Wernimont, Bridgette Skees, Angel Cichosz, and Karleia Connors. Eucharistic Ministers will be Kathy Rupiper and Audrey Siepker. Casket Bearers will be: Ross Wernimont, Judy Mayer, Dale Schlichte, Richard Danner, Kathy Schechinger, Ron Langel, Aaron Cichosz, and Zac Skees. The Carroll Catholic Daughters of the Americas and the Dedham American Legion Auxiliary will form an honor guard for the funeral mass. Burial will be in Sacred Heart Cemetery in Templeton. Friends may call at the Sharp Funeral Home in Carroll after 4 p.m. on Friday where there will be a rosary at 5 p.m. by the Carroll Catholic Daughters of the Americas and a Christian Wake Service at 6:30 p.m. The casket will be moved to Sacred Heart Church in Templeton on Saturday morning where additional visitation will be held from 9-9:45 a.m. Funeral arrangements are under the direction of the Sharp Funeral Home in Carroll and online condolences may be left for Margaret’s family at www.sharpfuneral.com. Born on May 25, 1921 at Templeton, Iowa, Rita Margaret, was the daughter of Clem and Anna (Fangman) Langel. Margaret grew up in Templeton and attended Sacred Heart School. On August 22, 1950, she was united in marriage to LaVern F. Murray at Sacred Heart Catholic Church in Templeton with Msgr. Francis Schultes officiating. The couple made their home in Templeton until 1966 when they moved to LaVern’s family farm south of Templeton. Margaret was a devoted homemaker and throughout her working career was also employed at Phil Neu’s Store, Kaus Grocery, JC Penney, and Templeton Telephone. In 1981, Margaret and LaVern moved back into Templeton. In 2013, Margaret became a resident at Sunnybrook of Carroll and was most recently living at St. Anthony Nursing Home in Carroll. She enjoyed spending time with her family, especially her grandchildren. She also enjoyed cooking, baking, playing cards and sewing. Margaret always loved spending time visiting and having coffee with her friends at the “Corner Station.” She was a member of Sacred Heart Parish, Parish Ladies Guild, Charter Member of the Dedham American Legion Auxiliary, Senior Citizens of Templeton, and the Catholic Daughters of the Americas where she served as Past Grand Regent. Margaret’s family would like to extend a special thanks to the staff at St. Anthony Nursing Home in Carroll for the loving care and support their mother received over the past 4 years. Margaret is survived by her daughter, Mary Kay Wernimont of Carroll, her son Ken Murray and his wife Linda, of Effingham, IL; her grandchildren: Heather Wernimont and friend Dave Elia, Ross Wernimont and fiancé Karleia Connors, Bridgette (Zac) Skees, Chris (Heather) Rinehart, and Angel (Aaron) Cichosz; 10 great-grandchildren; her sister-in-law, Lorrine Danner of Templeton; as well as many nieces, nephews, other extended relatives and many friends. Margaret was preceded in death by her parents Clem and Anna Langel; her husband LaVern in 1996; her son James Murray, her son-in-law Ron Wernimont; her parents-in-law, John and Crystal Murray; her sisters: Clara (Conrad) Bauer, Mayme (John) Bauer, Regina (Edward) Schlichte, Anna (Louis) Dopheide, Hildegard (Albert) Rupiper, Kathryn (Louis) Dopheide, Justina Langel and a sister in infancy, Beatrice Langel; and her brothers: Henry (Ann) Langel, Adolph (Evelyn) Langel, Joseph (Mary) Langel, Edward Langel, Vincent Langel, Simon (Viola) Langel, and Ted (Bonnie) Langel.

The family of (Rita) Margaret Murray created this Life Tributes page to make it easy to share your memories.

Send flowers to the Murray family.