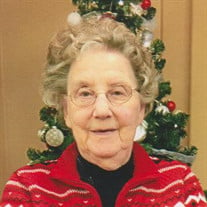 Rita Anstoeter, 91 of Carroll, died Friday, September 21, 2018 at the Papillion Manor in Papillion, Nebraska. Mass of the Christian Burial will be celebrated at 10 a.m., Tuesday, September 25, 2018 at St. John Paul II Parish - St. Lawrence Catholic Church in Carroll. The Celebrant will be Fr. Kevin Richter. Music will be by Kate Cuddy and the St. Lawrence Choir. Lector for the funeral mass will be Patty McLean. Karen Gertz, Mike Anstoeter, Sister Joann Gehling, and Jerry Gehling will present the offertory gifts. Eucharistic Ministers will be Diane Vonnahme, Margene Heisterkamp, and Sister Joann Gehling. Casket Bearers will be: Brian Gertz, Tony Anstoeter, Luke Anstoeter, Tessie Anstoeter, Breanna Anstoeter, and Annette Gehling. Burial will be in Mt. Olivet Cemetery in Carroll. Friends may call at the Sharp Funeral Home in Carroll after 4 p.m. on Monday where there will be a rosary at 5 p.m. and a Christian Wake Service at 6 p.m. The casket will be moved to St. Lawrence Church on Tuesday morning where additional visitation will be held from 9-9:45 a.m. Memorials may be left at the funeral home or the church for St. John Paul II Parish - St. Lawrence Church or Prairiewoods Spirituality Center. Funeral arrangements are under the direction of the Sharp Funeral Home in Carroll and online condolences may be left for Rita's family at www.sharpfuneral.com. Born on September 5, 1927 in Carroll, Iowa, Rita was the daughter of Herman and Genevieve (Gross) Gehling. She grew up on the Gehling family farm south of Carroll and attended Sts. Peter and Paul School. On February 22, 1949, Rita was united in marriage to Louis Anstoeter at Sts. Peter and Paul Catholic Church in Carroll. Rita and Louis made their home near Halbur where Rita was a devoted homemaker and assisted her husband with their farm operation. The couple later moved to the Carroll Community. Rita enjoyed canning, baking, and tending to her garden. Over the years she loved traveling with her husband and her family. Rita always cherished the times spent with her children, Karen and Mike as well as her grandchildren. The past four years Rita was residing in the Omaha area where she could be closer to her daughter Karen. She was a member of St. John Paul II Parish – St. Lawrence Church. Rita is survived by her children: Karen Gertz of Omaha and Michael Anstoeter of Van Meter; her grandchildren: Brian Gertz, Tony Anstoeter, Luke (Breanna) Anstoeter, and Tessie Anstoeter; her great-granddaughter, Taylee Anstoeter; her siblings: Rose Ocken of Carroll, Sister Joann Gehling, F.S.P.A. of Hiawatha, and Jerry (Kathy) Gehling of Phoenix, Arizona; her sisters-in-law: JoAnn Gehling of Carroll, Bonnie Rasmussen of Newton, Linda Gehling of Carroll, Delores Nagl of Carroll and Esther Williams of Manning; as well as many nieces, nephews, extended relatives and many special neighbors. Rita was preceded in death by her parents; her husband Louis Anstoeter; her sisters: Louise (Walter) Schmitz and Norma (Ed) Rasmussen; and her brothers: George (Lillian), Vernon, Carl, Edward (Lorraine), James, and Robert Gehling; and her sister-in-law and brothers-in-law: Catherine (Al) Dentlinger and Leo Williams.

The family of Rita Anstoeter created this Life Tributes page to make it easy to share your memories.

Send flowers to the Anstoeter family.