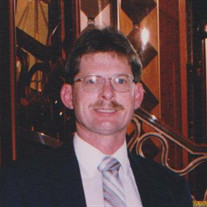 Rick Olerich, 63 of Carroll, died Wednesday, November 13, 2019 at his home in Carroll surrounded by his family and friends after a lingering illness. Visitation will be held from 2-5 p.m. on Saturday, November 16, 2019 at the Sharp Funeral Home in Carroll. In accordance to his wishes, following the visitation his body will be donated to the University Of Iowa Carver College Of Medicine. In lieu of flowers memorials may be directed to the family to be used for a later designation in Rick’s honor. Funeral arrangements are under the guidance of the Sharp Funeral Home in Carroll and online condolences may be left for Rick’s family at www.sharpfuneral.com. Rick, the son of Milo and Janice (Reis) Olerich was born on February 27, 1956 at Carroll, Iowa. He grew up in Ralston until junior high age when the family moved to Carroll. He attended Carroll High School, graduating in 1974. After his graduation, Rick enlisted in the United States Army and proudly served his country. On June 12, 1976, Rick was united in marriage to Janet Quinn in Carroll. The couple made their home in Carroll where Rick was employed as an Electric Repairman for Electric Motor Service for many years. Rick enjoyed woodworking, building many items and gifts for his family and friends. This is a hobby he passed down to his daughters, supervising them building, sanding, staining, and varnishing their own end table with a drawer, and a coffee table before they went to college. Rick enjoyed working with metal and electronics, and dry-walling. He also enjoyed plants, his garden, and canning tomatoes from his garden. Rick and his family made many memories Canoeing, and Camping. He always wanted to help and do things for others. Left to celebrate his life is his wife Janet Olerich of Carroll; daughters: Samantha (Tim) Schulz of Carroll, and Abbey (Brian) Brauckman of Carroll; grandchildren: Morgan Schulz, Zach Harkrider, Mylie Schulz, Carson Schulz, Lena Brauckman and Wendall Brauckman. Also surviving is his mother Janice (Reis) Olerich Huisenga of Carroll; his siblings: Allan (Jonna) Olerich of Glidden, IA, Linn (Linda) Olerich of Indianola, Cathy Bristol of Raymond, NE, Dean (Laurie) Olerich of Mundelein, IL, Mary (Brian) Ferden of Norwalk, and a special niece, Danielle Quinn of Carroll; as well as many nieces, nephews, and other extended relatives. Rick was preceded in death by his father, Milo Olerich, his parents-in-law, John and Dorothy Quinn, and a brother-in-law Larry Bristol. The family would like to express their sincere appreciation to Kindred Hospice for their support and care.

Rick Olerich, 63 of Carroll, died Wednesday, November 13, 2019 at his home in Carroll surrounded by his family and friends after a lingering illness. Visitation will be held from 2-5 p.m. on Saturday, November 16, 2019 at the Sharp Funeral... View Obituary & Service Information

The family of Rickey Olerich created this Life Tributes page to make it easy to share your memories.

Send flowers to the Olerich family.