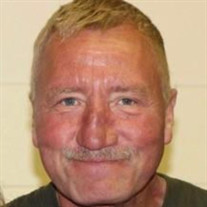 Richard A. “Turk” Lang, age 64, of Scranton, formerly of Templeton, Iowa, passed away on Friday, October 2, 2020, at the University Hospital in Iowa City, Iowa. An informal burial will be held on Saturday, October 10, 2020 at 3:00 p.m. at the Carrollton Cemetery. There will be no visitation at the funeral home. Funeral arrangements are under the guidance of the Sharp Funeral Home in Carroll and online condolences may be left for Turk’s family at www.sharpfuneral.com. ‘Turk’, as he preferred to be called, was born on May 25, 1956, in Manning, Iowa. He grew up in Templeton and graduated from Kuemper High School in 1974. He worked at Drees Plumbing, trucked for Lee Fuchs and George Brincks and worked as an electrician for Romey Electric. In recent years he worked for Seidl Electric, until his retirement. He also served in the National Guard. Turk was marked by a twinkle in his eye and a smile on his face, usually accompanied by a good story or a quick-witted comment to bring levity to any situation. He was an avid fisherman and hunter and was well known for his love of the outdoors. He never passed an opportunity to connect over a beer and slow down enough to be truly present to the people he was with. Rarely did he encounter a person he didn’t leave with a little more laughter, whether it be from a prank he pulled or a simple story he told. In some ways he may have kept to himself, but to those he let in…..he loved them well. He was a trusted friend in a pinch, a wise soul (especially with a cold Bud heavy in his hand), and a hair trigger when a fuzzy old tv was around. Affectionately known as ‘Ricky’ to those close to him, he left a significant mark on this little community in Western Iowa. No doubt stories will be told of his escapades for years to come and hearts will be lighter because of his presence and memory. Turk is survived by his nephew Scott Hoschouer; his sister, Gail Staples, a brother-in-law Darol Hoschouer and several relatives. He was preceded in death by his parents Lambert “Bert” and Marie (Prebeck) Lang, his sister Deanna Hoschouer in 2018 and his sister Sandy Behrens in 2011.

The family of Richard "Turk" Lang created this Life Tributes page to make it easy to share your memories.

Send flowers to the Lang family.