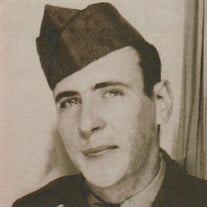 Richard Schieffer, age 87, of Carroll, passed away on Monday, October 21, 2019 at his home in Carroll. A funeral service will be held at 10:30 a.m. Thursday, October 24, 2019 at the Sharp Funeral Home in Carroll. Fr. Timothy Schott will preside. Casket Bearers will be Justin Schieffer, Michael Schieffer, Jason Walbaum, Dalton Springer, Jake Scheiffer, Jake Ritchhart, Chad Brincks, and Jeremy Hoffman. Burial will be in Mt. Olivet Cemetery in Carroll with military honors conducted by the Carroll American Legion. Visitation will begin at 9:30 a.m. on Thursday morning, and continue until the time of the funeral service. Funeral arrangements are under the guidance of the Sharp Funeral Home in Carroll and online condolences may be left for Richard’s family at www.sharpfuneral.com. Richard, the son of Richard Sr., and Elizabeth (Ganskow) Schieffer was born on March 14, 1932 at Carroll, Iowa. He grew up in Carroll, and attended school. Richard proudly served his country from 1953 until 1955 with the United States Army in the Korean Conflict. After his honorable discharge he returned to the area. On October 1, 1955, Richard was united in marriage to Donna J. Strunk at SS. Peter and Paul Catholic Church in Carroll. The couple lived and raised their family mainly in the Carroll area. Over the years Richard operated his own tree service business, and drove a Mail Route for many years. Richard enjoyed playing his guitar, drawing, unlimited trips to the casino with his son Rich, an occasional scratch ticket, but most of all Richard enjoyed time with his faithful canine companion, Bandit, and with his children and grandchildren, including the following sayings: • I want 20% of your earnings, and lottery winnings. • Where are you going Dad?---- I’m going to see a man about a horse. • Don’t call me Dicky Dale in the slop pail! • See you in the funny paper. Richard is survived by his children: Donna Schieffer of Des Moines, Deb (Mike) Kaminitz of Longmont, Colorado, Richard Schieffer III, of Carroll, Sharon (Tom) Hodge of Chandler, AZ, Mary (Dennis) Orthmann of Spencer, John (Valerie) Schieffer of LaVista, NE, Don (K’wami Moss) Schieffer of Carroll, Dave (Michelle) Schieffer of Carroll, several grandchildren, and great-grandchildren; his sister, Laura Humlicek of Carroll; as well as many nieces, nephews, and other extended relatives. He was preceded in death by his wife: Donna J. Schieffer; grandson, Shawn Brincks; his parents: Richard Sr., and Elizabeth Schieffer; his sister, Betty (Donald) Danner, and a brother-in-law: Butch Humlicek Sr., as well as his faithful canine companion Bandit.

Richard Schieffer, age 87, of Carroll, passed away on Monday, October 21, 2019 at his home in Carroll. A funeral service will be held at 10:30 a.m. Thursday, October 24, 2019 at the Sharp Funeral Home in Carroll. Fr. Timothy Schott will preside.... View Obituary & Service Information

The family of Richard Schieffer created this Life Tributes page to make it easy to share your memories.

Richard Schieffer, age 87, of Carroll, passed away on Monday,...

Send flowers to the Schieffer family.