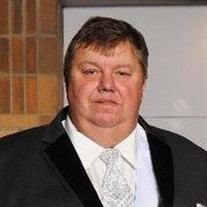 Richard Riesenberg, 64 of Exira, died Monday, November 25, 2019 at his home in Exira. Funeral services will be held at 1:30 p.m., Saturday, November 30, 2019 at the Sharp Funeral Home in Carroll with Fr. Steve Brodersen officiating. Visitation will be held from noon Saturday until time of the funeral service. Funeral arrangements are under the guidance of the Sharp Funeral Home in Carroll and online condolences may be left for Richard’s family at www.sharpfuneral.com. The son of Raymond and Elizabeth (Peter) Riesenberg, Richard was born on June 23, 1955 in Carroll, Iowa. He attended Holy Angels School and later graduated from Kuemper Catholic High School. On April 8, 1978, Richard was united in marriage to Betty Tigges in West Point, Nebraska. To this union were four children; the couple later separated. Richard farmed in the Templeton area and later owned and operated Riesenberg Construction for several years before residing in Exira. He enjoyed woodworking, had a love for hog farming and tending to his garden. Survivors include his children: Chad Riesenberg and wife Tiffany of Earling, Mary Bakkie and husband James of Des Moines, and Jeff Riesenberg of Carroll; his grandchildren: Collins and Connor Riesenberg, and Grayson and Lincoln Bakkie; his mother, Betty Riesenberg of Carroll; and his siblings: Patty Brown of Carroll, Ron (Phyllis) Riesenberg of Carroll, Karen (Mike( Schechinger of Adel, Allen (Lynn) Riesenberg of Audubon, Henry (Julie) Riesenberg of Roselle, Steve (Sara) Riesenberg of Halbur, and Glen Riesenberg of Ankeny. Richard was preceded in death by his son Billy Riesenberg and his father, Raymond Riesenberg.

The family of Richard Riesenberg created this Life Tributes page to make it easy to share your memories.

Send flowers to the Riesenberg family.