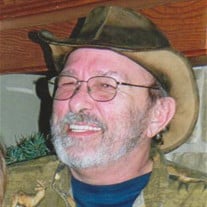 Richard D. Nagl, age 60 of Carroll, left this world quietly on the morning of Thursday, December 28, 2017, surrounded by the love of his life, his wife Kristine. Mass of the Christian Burial will be celebrated at 10:30 a.m. Tuesday, January 2, 2018 at Holy Spirit Catholic Church in Carroll. The Celebrant will be Fr. Brian Feller. Music will be by Barb McDermott and the Holy Spirit Choir. Lector will be Nate Nagl. Gift Bearers will be Denise Irlbeck, and Jeri Gehling. Eucharistic Minister will be Judy Feld. Casket Bearers will be Eric Nagl, Nate Nagl, Jake Nagl, Louis Nagl, Larry Nagl, Alan Nagl, Terry Eischeid, and Larry Broich. Burial will be at 1:30 p.m. at Holy Angels Cemetery in Roselle. Friends may call at Holy Spirit Church in Carroll after 2 p.m. on Monday, where there will be a Christian Wake Service held at 5 p.m. Visitation will resume at the church at 9:30 a.m. on Tuesday, and it will continue until the time of the funeral mass. Funeral arrangements are under the direction of the Sharp Funeral Home in Carroll, online condolences may be left for Rick’s family at www.sharpfuneral.com. Born to rattle this world on August, 6, 1957 in Carroll, Iowa, Rick was the Son of Don and Sylvia (Julich) Nagl. He grew up on a farm near Roselle alongside his three brothers, Louie, Larry (Margie) Nagl, and Alan (Sheree) Nagl, and his two sisters, Denise (Don) Irlbeck, and Jeri Lynn (Dan) Gehling. He spent most of his youth narrowly avoiding death, and polishing his orneriness, and wit on his siblings. From bicycles, to motorcycles, and on to cars, if you could make it go fast….or faster…he was riding or driving it. Rick graduated from Kuemper Catholic High School in 1975, and married Kristine Kennebeck on February 7, 1976 at Our Lady of Mt. Carmel Catholic Church in Mt. Carmel. Rick and Kris made their home in Carroll, and raised three sons, Eric (Clare) Nagl, Nate (Kate) Nagl, and Jacob (Jenny) Nagl. 209 North Court was not only a home that they filled with love, and made for their boys, it was a soft landing spot for so many more. Rick enjoyed the company of others and believed in building personal relationships. Whether it was a witty piece of advice, or just an ear and a cold drink, he would sit on his porch with Kris and his faithful dog Abby, and hand both out for free to almost anyone. Rick spent much of his working career in the construction field, where his easy personality and extensive carpentry knowledge really allowed him to shine. He held various positions in the construction field. From Heinrichs Construction, Roberts & Dybdahl, Circle B, and then finally to starting his own general contracting business, Nagl Construction. Over the 20 years of operating his business Rick made hundreds of lifelong friends, and finished thousands of beautiful projects. You don’t have to travel very far in or around Carroll before you run into something Rick built or helped build. His passion for the trade showed in his craftsmanship. Rick finished out his working career at Industrial Bearing as a machinist. Rick will be remembered by his 7 grandchildren, Mia, Ryder, Riley, Abram, Ayla, Channing, and Bryce, as Poe-Poe, their fun-loving Grandfather, that loved them unconditionally, and always reminded them each how special they are to this world. Rick will be remembered for his humor, his orneriness, his wit, and his well-rounded use of the “f” word. But he will be missed for his smile, his listening ear, and his compassionate heart. Rick lived his life at full speed and to the fullest, and he will be celebrated for the permanent mark he left in our lives! Rick is survived by his immediate family, his mother Sylvia Nagl, father-in-law Eugene “Bud” Kennebeck; his in-laws: Laurie Custer, Doug (Monica) Kennebeck, Doreen (Doug) Bender, Sue Schrader, Monica Kennebeck (Sherman Doyle), and an army of nieces, nephews, cousins, and close friends. Rick is preceded in death by his father Donald L. Nagl, mother-in-law Gayleen Kennebeck, and son Joseph Richard Nagl.

Richard D. Nagl, age 60 of Carroll, left this world quietly on the morning of Thursday, December 28, 2017, surrounded by the love of his life, his wife Kristine. Mass of the Christian Burial will be celebrated at 10:30 a.m. Tuesday, January... View Obituary & Service Information

The family of Richard Nagl created this Life Tributes page to make it easy to share your memories.

Send flowers to the Nagl family.