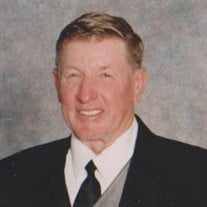 Richard Hinners, 79 of Halbur, died Tuesday, September 04, 2018 at St. Anthony Nursing Home in Carroll. Mass of the Christian Burial will be celebrated at 10 a.m., Saturday, September 8, 2018 at St. Augustine Catholic Church in Halbur. The Celebrant will be Fr. Steve Brodersen. Mass Servers will be Caleb Rotert and Braden Riesberg. Music will be by Julie Sibbel and the St. Augustine Choir. Lector for the funeral mass will be Tom Espenhover. Gift Bearers will be: Emma Branning, Summer Clark, Jacey Fuchs, and Aubrey Behrens. Eucharistic Ministers will be: Julie Eischeid, Sheri Leiting, and Joe Espenhover. Honorary Casket Bearers will be Richard’s grandchildren. Casket Bearers will be: Tim Hinners, Randy Hinners, Mike Eischeid, Larry Jo Hinners, Dale Hinners and Joe Hinners. Burial will be in St. Augustine Cemetery in Halbur with military honors conducted by the Arcadia American Legion. Visitation will be held from 4-7 p.m. on Friday at St. Augustine Church in Halbur. There will be a Christian Wake Service at 5:30 p.m. Additional visitation will be from 8:45-9:45 a.m. on Saturday at the church. In lieu of flowers memorials may be left at the church for the Richard Hinners family for later designations. Funeral arrangements are under the direction of the Sharp Funeral Home in Carroll and online condolences may be left for Richard’s family at www.sharpfuneral.com. Born in rural Halbur, Iowa on November 29, 1938, Richard was the son of Arthur and Loretta (Trecker) Hinners. He attended St. Augustine School and later graduated from Carroll High School. At a young age he took interest in agriculture being involved with 4-H show cattle and helping his father on the farm. In 1961, Dick was drafted in the United States Army, serving until his honorable discharge in 1967. On September 13, 1969 he was united in marriage to Helen Espenhover at Sacred Heart Catholic Church in Manning. Dick and Helen made their home southwest of Halbur where he was engaged in grain and livestock farming until his retirement at the age of 65 when the couple moved into the Halbur Community. Dick enjoyed playing cards and was an avid Iowa Hawkeye and Chicago Cubs fan. He loved watching all of his children’s and grandchildren’s activities. Dick was also active with the Carroll County Beef Producers and Carroll County Pork Producers, where he was a Past President. He was also a member of the Knights of Columbus, Manning VFW, Arcadia American Legion, and St. Augustine Church. Dick is survived by his wife Helen Hinners of Halbur; his children: Jackie (Kurt) Branning of Halbur, Rodney (Lori) Hinners of Manning, Jason (Mindy) Hinners of Pleasantville, Robin (Sean) Clark of Bloomington, IL, Jessica (Mike) Fuchs of Carroll, and Lizzy (Jeremy) Behrens of Carroll; 20 grandchildren; 1 great-grandchild; his siblings: Marjorie (Ray) Hacker of Halbur, Arden (Judy) Hinners of Carroll, Larry (Della) Hinners of Manning, and Jack (Lois) Hinners of Manning; his sisters-in-law and brothers-in-law: Lois Hinners, Margaret Hinners, Henry Darveaux, Duane (June) Espenhover, Dave (Maxine) Espenhover, Jane Eischeid, Shirley (Kenny) Vogl, Joe (Jane) Espenhover, Carol (Dave) Ramsey, Cindy (Scott) Heinrichs, Tom (Julie) Espenhover, Paul (Cindy) Espenhover, and Jerry Espenhover; as well as many nieces, nephews, and other extended relatives. Dick was preceded in death by his parents, Art and Loretta Hinners; his daughter, Amy Jo Hinners; his parents-in-law, Joe and Helen Espenhover; his sisters: Jeanette Eischeid and Dolores Darveaux; and his brothers: Vernon Hinners and Donald Hinners.

The family of Richard Hinners created this Life Tributes page to make it easy to share your memories.