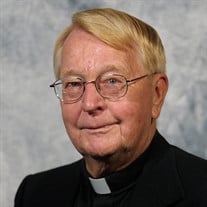 Rev. Marvin J. Boes, 87 of Sioux City, Iowa and formerly of Breda, died, Thursday, July 18, 2019 at Holy Spirit Retirement Home in Sioux City, Iowa. Mass of the Christian Burial will be celebrated at 10:30 a.m., Monday, July 22, 2019 at St. Bernard’s Catholic Church in Breda. The Celebrant will be Most Reverend R. Walker Nickless, Bishop of the Sioux City Diocese. Fr. Marvin’s nephew, Fr. Steve Boes will be the homilist. Con-Celebrants will be Priests of the Sioux City Diocese. Music will be by Marilyn Hundling and the St. Bernard’s Choir. Lectors, Gift Bearers, and Casket Bearers will be Fr. Marvin’s nieces and nephews. Burial will be in St. Bernard’s Cemetery in Breda with military honors conducted by the Breda American Legion. Visitation will begin at 3 p.m. on Sunday at St. Bernard’s Catholic Church in Breda where there will be a Christian Wake Service at 5 p.m. Additional visitation will be held from 9:30-10:15 a.m. on Monday at the church. Funeral arrangements are under the guidance of the Sharp Funeral Home in Breda and online condolences may be left for Fr. Marvin’s family at www.sharpfuneral.com. In lieu of flowers, donations are welcomed to Father Flanagan’s Boy’s Home, P.O. Box 600, Boys Town, Nebraska 68010. Father Marvin Boes is the son of Anthony and Matilda (Fleskes) Boes born on August 13, 1931, in Carroll, Iowa, and raised on his parents’ farm northwest of Breda, Iowa. He attended secondary school at St. Bernard’s in Breda. After spending a year at St. Benedict’s College in Atchison, Kansas, Father Boes served two years with the United States Army. He graduated from St. Benedict’s in 1957, receiving a B.A. in Economics. He spent the next year at Creighton University in Omaha, Nebraska. Through summer school sessions at Creighton University, Fr. Boes earned a Master’s Degree in Education in 1961. His seminary studies were completed at Mount St. Bernard Seminary in Dubuque, Iowa. On May 26, 1962, his ordination was celebrated in the Cathedral of the Epiphany at Sioux City, Iowa, by Bishop Joseph M. Mueller. On May 29, 1962, Fr. Boes celebrated his first Mass at St. Bernard’s Church in Breda, Iowa. In June 1963, Father Boes served as a Lt. Col. and an Air Force Chaplain in the Iowa Air National Guard at the Sioux City Air Field until his retirement after 23 years of service. During the years from January 1968 to May 1969, with the federal activation of his guard unit during the Vietnam War, he served as chaplain in the U.S. Air Force. Father Boes taught at Heelan High School in Sioux City, Iowa for three years followed by a year at Garrigan High School in Algona, Iowa. He served as assistant pastor at the Cathedral of the Epiphany for approximately four years. Beginning September 1966, he was part-time Diocesan Coordinator with Minorities, until he was assigned as a full-time coordinator in 1973. Upon his retirement from the Air National Guard, Father Boes served as administrator for three years at St. Philip’s Parish in Hornick, Iowa and for three years St. Casimir’s Parish in Sioux City, Iowa. In 1985, Fr. Boes was assigned the Director of the Diocesan Peace and Justice Commission and he continued in that position after his retirement. He then served as the pastor at St. Malachy Catholic Church in Madrid, Iowa from 1998-2001. He began serving as pastor for five years until 2008 at St. Boniface Parish in Sioux City, Iowa. Survivors include his three brothers; Vernon A. Boes (Lois) of Hopkins, Minnesota; Kenneth Boes (Ruth) of Columbia, Missouri and Eugene Boes (Mary Jane) of Elgin, Nebraska and many cousins, nieces, nephews and friends. Fr. Boes was preceded in death by his parents, Anthony and Matilda (Fleskes) Boes.

The family of Rev. Marvin Boes created this Life Tributes page to make it easy to share your memories.

Send flowers to the Boes family.