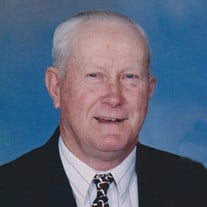 Raymond Sporrer, 84 of Carroll and formerly of Dedham, died Thursday, February 8, 2018 at St. Anthony Regional Hospital in Carroll. Mass of the Christian Burial will be celebrated at 11 a.m., Tuesday, February 13, 2018 at Holy Spirit Catholic Church in Carroll. The Celebrant will be Fr. Kevin Richter. Music will be by Barb McDermott and the Holy Spirit Choir. Lectors for the funeral mass will be George Grossman and Frank Nogel. Gift Bearers will be: Julie Buenzow, Ashley Nogel, Hailey Amro and Sarah Amro. Casket Bearers will be: Mike Grossman, Joseph Nogel, Jacob Amro, Chris Danner, Steve “Hans” Auen, and Bob Saunders. Burial will be at 1:30 p.m. on Tuesday in St. Joseph’s Cemetery in Dedham. Friends may call at the Sharp Funeral Home in Carroll after 4 p.m. on Monday where there will be a rosary at 5 p.m. and a Christian Wake Service at 6:30 p.m. The casket will be moved to Holy Spirit Church on Tuesday morning where visitation will resume at 10 a.m. and will continue until time of the funeral mass. Funeral arrangements are under the direction of the Sharp Funeral Home in Carroll and online condolences may be left for Ray’s family at www.sharpfuneral.com. Born on August 6, 1933 on the farm west of Dedham, Raymond was the son of Wenz and Clara (Sextro) Sporrer. He grew up on the family farm and attended schools in Templeton and Dedham. On May 4, 1954, Ray married the love of his life, Bernice Hahn at Holy Angels Catholic Church in Roselle, Iowa. The couple made their home on the family farm west of Dedham for 50 years and then moved to Carroll in 2004. Ray was a lifelong farmer, raising cattle and row crops over the years. He served on the Board of Directors for the Dedham Co-op and also became an auctioneer at the Audubon Sale Barn for several years. Ray played on the first Dedham slow pitch team and also loved watching his children and grandchildren in their sporting events. After his retirement he continued to go to the farm he loved on a daily basis to work on all his projects. His love for International tractors led him to collecting antique tractors and antique farm equipment especially those he or his dad had used over the years. Ray took up refinishing antique dressers which he gave to his daughters. Ray had an unsurpassed devotion to his family and especially to his wife with the special care he gave her the past 13 years. Ray was a member of Holy Spirit Church in Carroll and a former member for many years at St. Joseph’s Church in Dedham. Ray is survived by his wife Bernice Sporrer of Carroll; his children: Donna (George) Grossman of Dedham, Cindy Sporrer of Dedham, Cheryl (Frank) Nogel of Ames, and Brenda (Luai) Amro of Clive; his grandchildren: Mike (Kathy) Grossman of Adel, Julie (Ben) Buenzow of Ankeny, Ashley Nogel of Ames, Joseph Nogel of Ames, Jacob Amro, Hailey Amro, and Sarah Amro, all of Clive; his great-grandchildren: Ella, Hannah, and Landen Grossman, and Coleman, Abigail, and Meredith Buenzow; one sister, Florence Fledderman of Omaha; sister-in-law, Ruth Klocke of Hayfield, MN; his brother-in-law, Louie (Linda) Hahn of Churdan; as well as many nieces, nephews, and other extended relatives. Ray was preceded in death by his parents; his siblings: Rita (Clayton) Irlbeck and Delores (Bernard) Klocke; his brothers-in-law and sisters-in-law: Clarence Fledderman, Norbert (Marie) Hahn, Joe (Josephine) Hahn, Lawrence (Melvina) Hahn, Raymond Hahn and Harold Klocke.

The family of Raymond Sporrer created this Life Tributes page to make it easy to share your memories.

Raymond Sporrer, 84 of Carroll and formerly of Dedham, died Thursday,...